Why Do Michigan’s Failed Economic Programs Stick Around? 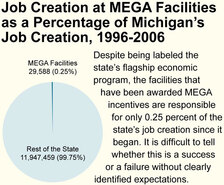 The Michigan Economic Growth Authority, which awards refundable tax credits to selected businesses, came under much scrutiny this year with audits that showed missed expectations, studies that indicated it was responsible for little-to-negative economic activity, and scandals indicating that bureaucrats fail to vet applicants thoroughly. Yet it continues. It’s hard for politicians to recognize that a program is a failure when they have not defined success. Governor-elect Rick Snyder and the new Legislature should review the state’s economic development programs and clearly state what they expect the program to accomplish.

Bureaucrats cannot be expected to be objective judges of the success of the programs they create.

It’s no secret that Michigan has struggled this decade — unemployment rates increased from 3.7 percent to in 2000 to just under 13 percent today, and production levels have been stagnant. The state’s economic problems have been deep and impacted nearly all of Michigan’s industries, not just the state’s auto companies.

Public policy responses have yet to improve Michigan’s situation. Broad problems in the economy are being addressed by targeted programs: incentives for specific industries, businesses and locations. Legislators believe these programs will improve Michigan, but rarely discuss whether they are capable of turning the state around, how to tell if they are working or expectations on when these will have succeeded. Policymakers should explain their criteria for measuring success and insist on objective analyses of the programs’ costs and benefits.

Recent discussions on Michigan film subsidies highlight the importance of performance measurements. A report from the Senate Fiscal Agency showed that the program costs the state $10 in taxes for every $1 in taxes generated by film activity, deflating a hope of film incentive supporters that the program would be a financial winner for the state. This information, however, was irrelevant to the administration, as Gov. Jennifer Granholm responded that she never expected the incentive to make the state money.

Policymakers should voice what their expectations are. Legislators stated that they expect a Michigan-based film industry, but two years after the incentive was passed, a studio has yet to be operational, let alone self-sustaining. While industry supporters argue that given enough time, film producers will stay in the state without the incentive, policymakers have not discussed when they think this will occur or how many of these permanent jobs are expected, even though they boast that they will be coming. Lansing has not even broached the subject of whether the incentive will be eliminated if the jobs fail to arrive.

The state bureaucracy shrugs when presented with these issues. The Michigan Economic Development Corp., which administers the state’s business incentives, has never declared any of its programs less than a stellar success and admonishes the Legislature and others any time there are threats to those programs.

When asked to talk about the successes of the programs, MEDC officials largely point to the activities — the number of companies attracted to the state, the millions of dollars pledged in investments, the number of jobs anticipated. They are also fond of economic impact studies that estimate secondary economic impacts while ignoring costs.

But they’ve failed to define success in meaningful terms. Economic growth is not hidden — there are monthly employment reports, annual production figures, personal income measures and poverty rates. Programs that fail to have measurable, obvious positive effects should be eliminated.

It may take a long time for economic programs to have measurable effects, but those expectations should be explicit. Only once has an official put an expected time frame on a program’s economic impacts: the famous “blown away” statement where Gov. Jennifer Granholm expected obvious results from the 21st Century Jobs Fund programs in five years. Despite its failure, the state will spend $75 million on the program in fiscal 2011.

Bureaucrats cannot be expected to be objective judges of the success of the programs they create, but they should be expected at least to administer them well. Expectations are needed, and the new Legislature and governor have an opportunity to set them.

James Hohman is a fiscal policy analyst at the Mackinac Center for Public Policy, a research and educational institute headquartered in Midland, Mich. Permission to reprint in whole or in part is hereby granted, provided that the author and the Center are properly cited.