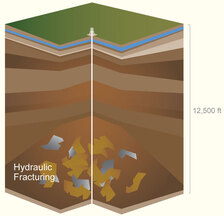 This illustration shows how deep below the Earth’s surface that hydraulic fracturing occurs.

The United States has ample natural gas supplies to provide the nation's energy needs for the remainder of the century. The problem is that much of the natural gas is found in deep shale formations several thousand feet below the earth's surface. Geologists have known for years that the natural gas was there, but no one knew how to economically recover it. That has changed with the use of modern hydraulic fracturing technology combined with horizontal drilling techniques.

Wind and other alternative energy get most of the attention from politicians and the media, but producing natural gas by hydraulic fracturing, or "fracking" as it is commonly referred to, is far more important to America's ability to provide affordable and dependable energy to heat our homes and power our industries.

Fracking operations to recover natural gas have been done safely and without environmental damage in America dating back to the 1940s.

Fracking is the process of creating fissures in underground formations to allow natural gas to flow. Horizontal drilling is utilized to access deep shale formations that contain natural gas. Fluid comprised of 99 percent water and sand and containing small amounts of chemicals found in common consumer products is injected into formations to create fissures from which the natural gas can be economically recovered. The wells are encased in multiple layers of steel and surrounded by cement to protect groundwater.

Fracking requires the one-time use of several million gallons of water per well or approximately the amount of water used to grow 7.5 acres of corn in a season. Much of that water can be recycled.

Natural gas is a clean-burning fuel that emits less greenhouse gas than coal. It also is the fuel of choice for heating most homes in the nation and is used increasingly to provide electricity. Natural gas produced in Michigan supplies approximately one -third of the natural gas used in the state. According to a report prepared for the American Petroleum Institute by Price Waterhouse Coopers, the oil and gas industry employs more than 179,000 workers in Michigan and comprises 4.4 percent of the state's economy.

Natural gas is also important to the increased development of wind power. Due to wind power's unreliability, it must be backed up by other energy sources. Natural gas peaking power plants are most often utilized in conjunction with wind because they can more easily be started up and shut down than can a coal base load power plant.

The development of America's vast deep shale natural gas reserves is uncertain. Environmentalists and others contend that fracking could cause groundwater pollution that could lead to potential drinking water contamination. Lawsuits have been filed to prevent fracking operations. New York lawmakers have introduced legislation that would place a moratorium on new fracking operations. Senate Bills 1530, 1531 and 1532 have been introduced by Michigan legislators that would place further restrictions on using fracking technology to recover natural gas in the state.

But natural gas development activities, including fracking, are already subject to several federal and state environmental laws. Regulators at the Michigan Department of Natural Resources and Environment should be allowed to do their job without political interference. Fracking operations to recover natural gas have been done safely and without environmental damage in America dating back to the 1940s.

Safely developing the country's vast natural gas reserves is critical to both the nation's economy and national security. It is also important to hold the oil and gas industry to the highest safety and environmental standards in developing deep shale reserves. Oil and gas development is never 100 percent free from environmental risk, but fracking has proven to be a safe and effective technology in helping to meet the nation's energy needs. Efforts to prevent use of the technology by overregulation will increase energy costs and decrease jobs.

Russ Harding is senior environmental analyst and director of the Property Rights Network at the Mackinac Center for Public Policy, a research and educational institute headquartered in Midland, Mich. Permission to reprint in whole or in part is hereby granted, provided that the author and the Center are properly cited.