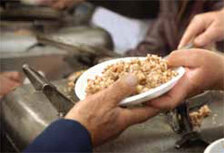 Alternative approaches to providing food and other necessities could better serve the needy.

But now, perhaps, at a time of high and persistent unemployment, researchers and elected officials should also focus on applying the principles of choice and privatization to programs of providing the poor with the basic needs of food, clothing and shelter.

Such an approach could:

When these principles are applied, a state monopoly system can be transformed into a market-based system that is responsive to its customers, where costs are reduced and where quality improvements can be realized.

This is a strategy to privatize the welfare state by taking away from it both clients and revenues, one individual or one family at a time.

Before any contracts are bid out, Michigan's welfare process would have to be broken down into thousands of small jobs. A typical small contract would obligate a contractor to provide only for the basic needs of one person or one family for a short period of time, and any household would be eligible to bid for such a contract. Contractors would not necessarily be required to shelter the needy in their own homes, but could also house them in vacant houses or apartments.

The bidding process would establish an acceptable range of low prices. The person seeking shelter, now empowered as a customer, could choose a provider from among the low bids. As the bidding progressed, this person could encourage friends and relatives to submit bids in the acceptable price range.

Without actual bidding taking place, no one can predict for certain how much it would cost to serve an average needy person through such a program. But some clues are available. We know, for example, that Michigan's foster care program pays households about $550 a month to provide food, clothing and shelter to children ages 13 to 18. In the apartment rental market, at a time when many apartments in Michigan are now vacant, it is possible to rent half of a small apartment, sharing it with another person, in many parts of Michigan for about $300 a month. From such clues as these, it seems likely that an emergency shelter program could easily provide basic needs for about $500 a month, especially if program participants would continue to receive food stamps, which could provide an additional $100 a month to cover food expenses. After actual bidding takes place, it may be found that the monthly cost is considerably less.

Ideally, such a program would be financed by tax credits equal to the amount of accepted contract bids. At $500 a month, approximately 900,000 of Michigan's needy could be served by such a program before exhausting Michigan's $5.4 billion annual human services budget.

All people, in deciding where to live, must weigh a number of factors. In some cases, proximity to a job may be the determining factor. In other cases, the amenities of a building or the desire to live near relatives is viewed as more important. Weighing and sorting through such issues in an effort to make the best possible decision is called "the pursuit of happiness." Enabling the needy to choose from among a number of available shelter locations would also allow them, to some extent, to exercise that inalienable right.

Readers might be familiar with the Cloward-Piven Strategy. This is a leftist strategy developed in 1960s to overburden welfare systems with new applicants in order to create a socialist revolution. By enrolling many new welfare recipients, Cloward and Piven believed they could produce a financial crisis, which in turn would spark a wider conflict, which could then be resolved by implementing a new, large-scale federal program of wealth redistribution.

To Cloward-Piven can now be opposed what might be called a Williams Strategy. This is a strategy to privatize the welfare state by taking away from it both clients and revenues, one individual or one family at a time. This process would continue until all the needy had found places to live through a new emergency shelter program, with most of them choosing to live with friends or relatives. At that point, after having lost all its clients, the welfare system as we know it, welfare as a state monopoly, will be no more.

Jeffrey Williams, a writer who lives in Lakewood, Ohio, is an adjunct scholar with the Mackinac Center for Public Policy, a research and educational institute headquartered in Midland, Mich. Permission to reprint in whole or in part is hereby granted, provided that the author and the Center are properly cited.