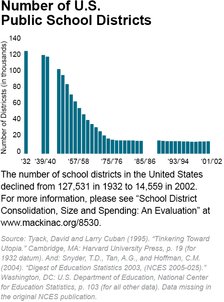 The number of school districts in the United States declined from 127,531 in 1932 to 14,559 in 2002. For more information, please see “School District Consolidation, Size and Spending: An Evaluation.”

The seemingly annual debate about school district consolidation is in full bloom. The debate was sparked anew when a Michigan State University study claimed taxpayers would save $612 million by consolidating Michigan's 551 school districts into 83 single-county districts. Three days later, Gov. Jennifer Granholm proposed spending $50 million to "incentivize" districts to merge. While exploring consolidation might be appropriate for some districts, Michigan won't save hundreds of millions by merely reorganizing its $20 billion public school system.

What determines the bulk of Michigan schools’ costs are not lines on a map, but labor contracts signed by local school boards and unions.

The MSU study is flawed in many ways, and policymakers should disregard it. Just for starters, significant portions of the study appear to have been directly lifted from other sources - a form of plagiarism that any college student would recognize. MSU says it's investigating.

Most plagiarism experts say that this type of flaw can compromise an entire study. Whether it does or doesn't is of no matter in this case, because the MSU report's methodology is also very problematic. Sharif Shakrani, author of the study and senior scholar at MSU's Education Policy Center, wrote that his research "is based and builds on" a 2001 working paper on consolidations in a dozen rural New York districts between 1985 and 1997.

The study doesn't even attempt to explain why the results from 12 consolidations more than 20 years ago in another state applies to Michigan. In fact, the author simply took some of the findings from that study and applied them evenly across all of Michigan, assuming that any set of districts, no matter their geographical location, could merge. This methodology is haphazard, and one of the coauthors of the original New York study agrees.

Professor William Duncombe, associate director of the Education Finance and Accountability Program at Syracuse University, said the MSU study was "not an appropriate use of scientific evidence," and called this methodology "extremely naïve." Duncombe's research finds that consolidation might only save money for districts of less than 1,000 students, and that's why he concludes, "Blanket attempts to consolidate just don't make any sense."

Duncombe's research aligns with a 2007 analysis on school district consolidation done by Andrew Coulson, an adjunct fellow with the Mackinac Center. Coulson's study found that consolidating could hypothetically create savings for small districts, but the statewide impact would be extremely small. In fact, counter-intuitive to this entire discussion, our study showed empirically that the state would save more money by breaking up larger districts than by merging smaller ones.

Even if one were to accept the findings of the MSU study — despite its apparent plagiarism and problematic methodology — the savings it predicts from consolidating are still exaggerated. Although the study states that charter public schools should not be included in an analysis of school district consolidation, it includes them in its consolidation savings equation anyway.

Despite its many flaws, the MSU study drew headlines because of its promise to policymakers that they could save $612 million by simply reorganizing Michigan's public school districts. The study's actual research doesn't support this claim at all.

What determines the bulk of Michigan schools' costs are not lines on a map, but labor contracts signed by local school boards and unions. Instead of dealing with these built-in costs, the governor and Legislature would prefer talking about "safe" subjects like school consolidation that don't draw heavy fire from powerful special interests groups like the Michigan Education Association.

The state needs to either create incentives for local districts to control their labor costs or reform state-controlled school spending, like the pension system. Until this is done, expect politicians to continue to chase the reform gimmicks that will provide them cover for failing to do something about the rising costs.