Michigan Schools Contract Out More Than Ever (Viewpoint) 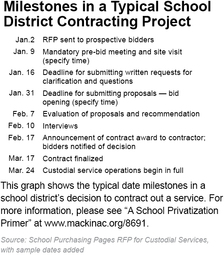 This graph shows the typical date milestones in a school district’s decision to contract out a service. For more information, please see "A School Privatization Primer.”

Michigan's public school districts receive a stable stream of revenue from Lansing, but face increased demands for employee salaries and benefits, so it comes as no surprise that a record number of districts contracted out for food, custodial or transportation services in 2010. According to the Mackinac Center's 2010 School Privatization Survey, 48.8 percent of Michigan school districts contracted out for one of the three main noninstructional services, an 8.0 percent increase over 2009. Privatization of these services has increased by 57.5 percent since 2001.

Some districts have arrangements where, as employees retire or leave the district, the positions are replaced with leased workers.

And it's no surprise that more districts contract out for these services, as those that did so expect large savings. Novi Community Schools, a 6,000-student district in Oakland County, expects to save more than $3.5 million in the next 30 months by contracting out custodial services with GCA Service Group. That is effectively a $233 per-pupil funding increase. Novi was one of 32 districts that began contracting out for custodial services.

While custodial service is the fastest growing area of contracting, food service remains the most frequently contracted service, with 31.2 percent of districts contracting out. This year, 12 districts began new food service contracts. This reverses the trend from the past two years, when the number of districts with private food service managers fell slightly.

One of the districts that contracted out for food services was Rochester Community Schools. The nearly 15,000-student district said it expects to save $563,403, or about $38 per student, by contracting its food services out to Chartwells.

Growth in districts contracting out their transportation service has been significant in the past few years. This year, 13 districts began new contracts for busing, increasing the proportion of districts that contract for this service to 9.3 percent. Five of those districts were in Houghton County. Districts there had looked at a consolidation and joint contract for transportation services, but when complications arose, the districts took action themselves and bid out their own services. Portage Township Schools, Tamarack City Schools, Calumet/Laurium/Keweenaw Public Schools, Adams Township Schools and Chassell Township Schools expect to save a combined $334,136. The savings of all five school districts amount to an average of $87 per pupil.

Pension costs are a financial drain on school districts. Districts must pay about 19 percent of payroll to support retirement benefits of public school employees. This is one reason why contracting out with employee leasing services for noninstructional services is attractive to districts. The companies usually offer retirement savings benefits through 401(k) plans, which can save the district up to 10 percent. Employee leasing agencies accounted for three of the new food service contracts, seven of the transportation contracts and seven of the custodial service contracts.

Some districts have arrangements where, as employees retire or leave the district, the positions are replaced with leased workers. The arrangement is working in Chassell Township Schools, where its cook and food service assistant retired and became leased employees through GMS. The district had been losing $30,000 in its food services but now is running a $10,000 surplus.

Privatization has not been the only cost-savings idea explored by districts trying to control costs. As a new addition to the privatization survey, districts also reported on services they began sharing with other districts and their ISD. Food service sharing was popular, with 52 districts sharing parts of food service, either through sharing a food service director or by setting up a food purchasing block
with neighboring districts.

James Hohman is a fiscal policy analyst and Dustin Anderson is a research intern at the Mackinac Center for Public Policy, a research and educational institute headquartered in Midland, Mich. Permission to reprint in whole or in part is hereby granted, provided that the author and the Center are properly cited.