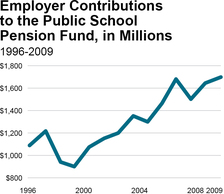 The Michigan Education Association, the state's largest public school employee union, is suing to have the Michigan Legislature's recent revision of school employee retirement benefits declared unconstitutional. The suit should have little chance, given decades of court opinion and the failure of a similar MEA lawsuit in 2005. The union's unwillingness to recognize the weakness of its case suggests it does not properly appreciate the burden its members' generous retirement benefits place on state taxpayers.

The MEA is objecting to this provision at the very time state government faces spending problems, a listless economy, high unemployment and swelling health care costs.

The legislation at issue, Public Act 75 of 2010, covers a range of topics, including an early retirement incentive for public school employees and a requirement that they contribute 3 percent of their base salaries to help finance school retiree medical benefits. These health benefits can pay up to 100 percent of medical and 90 percent of dental, hearing and vision insurance premiums for school retirees and slightly less for their dependents.

This is a generous retirement benefit. Nevertheless, the MEA alleges that requiring the new contribution violates public school employees' "contractual rights" to their retiree medical benefits under the Michigan and U.S. constitutions.

It's true that both the Michigan and federal constitutions prevent the impairment of contracts. With public employees, however, the pivotal question is whether legislation related to their compensation actually represents a contract.

To deal with this question, courts in the late 19th and early 20th centuries developed a constitutional doctrine stating that absent an unmistakable intent to be contractually binding, a law passed by a legislature only sets a policy. As the U.S. Supreme Court explained: "This well-established presumption is grounded in the elementary proposition that the principal function of a legislature is not to make contracts, but to make laws that establish the policy of the state. Policies, unlike contracts, are inherently subject to revision and repeal. ..."

The delegates at Michigan's 1963 constitutional convention were aware of this distinction when they inserted a constitutional provision stating, "The accrued financial benefits of each pension plan and retirement system of the state and its political subdivisions shall be a contractual obligation thereof which shall not be diminished or impaired thereby." This passage is an unmistakable commitment to a contract, and it's a key element in the MEA's case.

But just five years ago, following an earlier MEA lawsuit alleging that an increase in retiree health co-pay was unconstitutional, the Michigan Supreme Court analyzed the state constitution's pension provision to determine whether it covered retiree health benefits. In a 5-2 vote, the court said no. The justices clarified that while cash pensions are typically considered financial benefits, health benefits are not, since they don't "accrue" like a pension. Thus, the court concluded the Legislature could legally reduce state or local government retirees' health benefits.

That ruling should hold in the current lawsuit. In the disputed law, the Legislature explicitly stated that it was not making a binding commitment to the provision of retiree health benefits, although it appears to have made a clear contractual promise to spend the 3 percent employee contributions it receives on school retiree health care. Ironically, then, the MEA is suing to remove the one provision of the law that may really place the state under a contractual retiree health care obligation (albeit limited).

This 3 percent provision asks public school employees to contribute part of the cost of their generous retiree health care benefits — benefits that most Michigan taxpayers do not have themselves. The MEA is objecting to this provision at the very time state government faces spending problems, a listless economy, high unemployment and swelling health care costs.

In fact, aside from the money allocated to this 3 percent fund, the Legislature could legally reduce retiree health benefits for public school employees to zero — and not just for future employees, but for current ones as well. If the MEA cannot recognize the burden that financing its members' expensive benefits places on state taxpayers, its members may be confronting much harder sacrifices in the years to come.

Patrick J. Wright is director of the Mackinac Center Legal Foundation at the Mackinac Center for Public Policy, a research and educational institute headquartered in Midland, Mich. Permission to reprint in whole or in part is hereby granted, provided that the author and the Center are properly cited.