Are Public Schools Underfunded? No 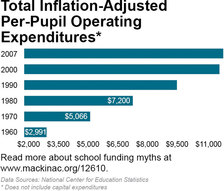 (Editor's note: This article has been modified to correct an error that appeared in the original version. The version below correctly states that in 2007, Michigan's state and local revenue for public schools per $1,000 of personal income ranked third in the nation, behind Wyoming and Vermont.)

A common claim by Michigan's public school establishment and its political allies is that, despite spending $20 billion annually on education, our schools are "underfunded." Comparisons to other states and to historical funding levels show that the claim is unsubstantiated and misleading.

The real reason for school money troubles is not “underfunding,” but a failure to contain employee costs that comprise about 80 percent of operational budgets.

The underfunding myth rests on an assumption that there exists some known "price" for a public school education that taxpayers are failing to meet. In fact, no such figure exists. All we have are the amounts actually spent on schools and the knowledge that they have consistently increased each year for at least the last five decades.

According to the National Center for Education Statistics, the per-student operating cost of Michigan's public schools nearly quadrupled from 1960 to 2007, from $2,991 in 1960 to $11,337 in 2007, as measured in 2007 dollars. Therefore, insinuations by the school establishment that its funding has undergone some dramatic decline in recent years should be taken with a large grain of salt. (These per-pupil operational expenses do not include school buildings and other capital spending.)

In addition, Michigan taxpayers transfer a greater proportion of their income to public schools than those in all but two states (Wyoming and Vermont). Figures from the Bureau of Economic Analysis (and reported by the National Education Association) show that some $55 out of every $1,000 in state personal income is consumed by our public school establishment. Vermont residents pay $56 per $1,000, and the national average is around $43 per $1,000. Residents in Nevada pay the least, $32 per $1,000 of personal income.

There are other ways of comparing public school price and value. Some types of tax-supported schools cost much less to operate than others. Michigan's public charter schools cost on average $2,200 less per pupil in 2007 than conventional schools. Put another way, public charter schools provide essentially the same service at a 25 percent "discount." Rather than accepting the "underfunding" myth, perhaps taxpayers should complain about being overcharged.

Confusion also surrounds the state School Aid Fund, over which the Legislature exercises control. Since Michigan's economy and tax base have shrunk over the last decade, the amount of state revenue flowing into this particular funding source has declined as well. However, that decline has been offset by a huge increase in the amount of federal money being funneled through the School Aid Fund. These revenues grew from $122 million in 2000 to more than $2 billion in 2009.

Also, the number of students statewide has declined 6 percent over the last decade. After adjusting for inflation, districts on average get $450 more School Aid Fund revenue per student than they did in 2000.

Other reasons for what may seem to be perpetual school money troubles are merely circumstantial. By law, Michigan school districts must adopt a balanced budget by the end of June. However, the state's fiscal year doesn't begin until Oct. 1, and the Legislature rarely finalizes its budget before July. This unquestionably generates uncertainty for school boards, which among other things contributes to the "underfunding" myth.

Finally, union contracts dictate that school districts notify employees of potential layoffs prior to the end of the school year. As a result, many more "just in case" pink slips are issued than the actual number of layoffs. Not surprisingly, the warnings get more attention than their later non-execution. In fact, the actual student-to-employee ratio of 8-to-1 has remained unchanged over the last
10 years.

The real reason for school money troubles is not "underfunding," but a failure to contain employee costs that comprise about 80 percent of operational budgets. As long as school boards continue to agree to contracts that grant school employees, particularly teachers, automatic pay increases and lavish benefits packages that outpace comparable private-sector averages and the ability of taxpayers to support, schools will never have "adequate" funding.

The beneficiaries of those unsustainable benefits have a strong incentive to promote the "underfunding" myth, but taxpayers should exercise a healthy measure of skepticism. On the whole, Michigan schools have more resources available than ever before, and receive a larger portion of state and local tax revenues than almost any other state.