More and More a Political Animal 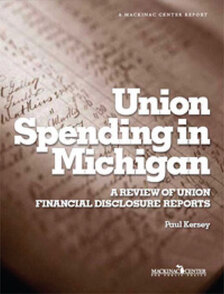 More information about this issue can be found in “Union Spending in Michigan: A Review of Union Financial Disclosure Reports.”

Where the union movement might have once been able to present itself as an institution dedicated to protecting members' interests in the workplace, it is becoming more and more a political animal. Recently released federal reports filed by several of the nation's largest unions show that private-sector unions are losing members and dues revenue, while government employee unions are gaining both. At the same time, unions are putting more of their dues money into activism.

The United Auto Workers is the most prominent example of a shrinking private-sector union. Over the course of 2009, the UAW lost 75,000 members. That represents nearly one-sixth of the total it had at the beginning of the year. Annual dues income sank $38.4 million, a drop of nearly 25 percent compared to 2008.

Some union organizations have reached the point where they feel no need to pretend that their focus is on anything other than politics.

But the UAW was hardly alone: Between 2008 and 2009, the Teamsters lost more than 38,000 members and $6 million in dues, while the Steelworkers lost nearly 80,000 members — better than 10 percent of its membership — and saw dues revenue drop by $7 million. UNITE-HERE, the ungainly combination of garment and hotel workers, had an especially rough year, losing more than one-third of its members, going from almost 367,000 to just a shade over 240,000, largely thanks to internal fighting. Dues declined precipitously as well, from $69 million in 2008 to $48.5 million in 2009. A few private-sector unions, such as the Carpenters and Machinists, managed to maintain their revenues, but even those two unions lost members. Overall, private-sector unions lost members amidst the continuing recession.

Those unions are the NEA and AFSCME, which apparently went all-in during the 2008 elections. Most unions typically report relatively modest spending on politics (sometimes by mischaracterizing contributions to political groups as "representation" or as "charitable activity"), but the national NEA headquarters reported spending $50.4 million on political and lobbying activities during the 2008-2009 school year, while spending just $49.3 million on representing workers in the workplace. AFSCME national headquarters was even more blatant, spending $63.3 million on politics and only $38.9 million on representation in 2008.

Unions once existed to ensure that workers had leverage to bargain for better wages and working conditions, but for years they have been evolving into something entirely different: political entities that contest elections and lobby government. Most union workers are employed by government, and some union organizations have reached the point where they feel no need to pretend that their focus is on anything other than politics.

Unions are becoming more political in nature, and there's no reason to expect this trend to stop. The union agenda is fairly simple; they can be relied on to react quickly and negatively toward nearly any attempt to streamline government services, and are quite willing to imposes higher tax burdens on the private sector. Because government employee unions in particular draw their funds from government under the guise of membership dues, this represents more and more taxpayer funds being diverted into a permanent lobby for big government.