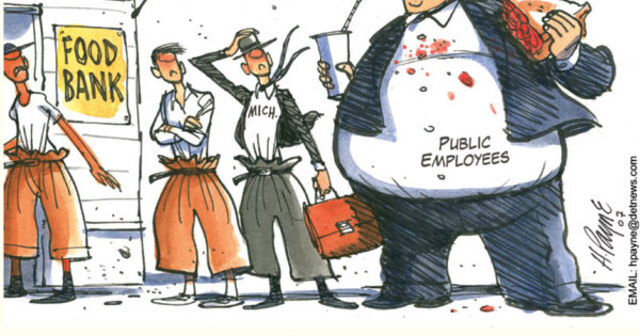 Michigan Taxpayers Have Already Made Compromises

The Michigan Legislature recently passed reforms that slightly lower the cost of employing state and public school workers by requiring modest employee contributions for future retiree benefits. The reforms may be cited by legislators who want to enact a service tax, describing it as a "grand bargain" wherein both taxpayers and spending interests give a little and get a little. Unfortunately, the "grand bargain" is a lopsided compromise that will further burden taxpayers.

Since 2002, Michigan residents have seen four different tax increases: Hikes in income and business tax rates in 2007, and cigarette tax hikes in 2002 and 2004. These are in addition to other revenue enhancements, such as adding "driver responsibility fees" to traffic tickets and selling off future tobacco settlement revenues. Legislators have also reneged on promised phase-downs and phase-outs of income and business taxes. In return, the state received balanced budgets and not a whole lot else.

To the taxpayers, the only issue is the amount they are required to contribute. The state’s current policies make them pay more each year.

The cost of government employees, however, keeps increasing. In fiscal 2002, state government spent $3.9 billion in wages and benefits for 60,000 employees. In fiscal 2008, the last year for which data is available, that cost had grown to $4.7 billion despite employing 9,300 fewer full-time equivalent employees.

On average, Michigan spends $93,039 per FTE state employee, up from $65,176 in 2002. State fiscal strains resulted in cuts to other areas of the budget, including university appropriations and local government revenue sharing, even as taxes were raised. But the level of pay and benefits of Michigan's government work force has only increased.

Few state employees receive a $93,039 salary, though. Insurance benefits and retirement costs require 30.5 cents of every dollar in state compensation, and they have grown substantially. Since fiscal 2002, the state's payments for retirement have nearly doubled (state retirement includes generous health benefits), while payments for health insurance have increased by 48 percent. Protecting the wages and benefits received by the state government work force has clearly been a priority for policymakers.

Public school budgets have been even more sheltered than have the state's employees from Michigan's decade-long economic downturn. From 2002 to 2008, cumulative revenues to school districts increased by 2.3 percent, adjusting for inflation. That may not sound like much, but at the same time, total private-sector earnings in Michigan — every private-sector paycheck, employer-paid benefit and dollar earned by a private business — fell 11.5 percent, adjusted for inflation. Public school enrollment over this time fell 3.4 percent. School spending has been detached from declines in both the student population and the economy.

If state and local governments (including school districts) were to bring the fringe benefits received by public-sector employees in line with those of the private sector, our calculations show the savings would equal $5.7 billion annually. This is more than enough to repeal all of the recent state tax hikes, eliminate the Michigan Business Tax and substantially lower any other state tax.

The differences between the compensation for Michigan's government employee and its private-sector taxpayers are unsustainable. Reform is critical. Policymakers are beginning to address the problem, but the current proposals fix only a fraction of the problem.

The savings from the proposals to require employee contributions to state pension systems are difficult to project. At best, the bills would save $400 million annually, which is substantial, but a far cry from the $5.7 billion gap now in place. At worst, the bills may actually cost taxpayers more through provisions that multiply pension benefits and mandate other retiree benefits.

There is constant talk in Lansing about the structure of public-employee benefits: what insurance coverage to offer, whether to pool benefits among various levels of government and whether government workers should be in a "defined-contribution" or a "defined-benefit" retirement system. But to the taxpayers, the only issue is the amount they are required to contribute. The state's current policies make them pay more each year.

Lately, those costs of compensation have increased without any votes from Lansing and with no public discussion. Public-employee expenses are treated as just another cost that taxpayers must bear. But taxpayers have given up much over the past eight years to shore up a broken system. Any public policy "bargain" appealing to "fairness" needs to address the unsustainable growth of public compensation. Addressing these costs would make a service tax unnecessary.