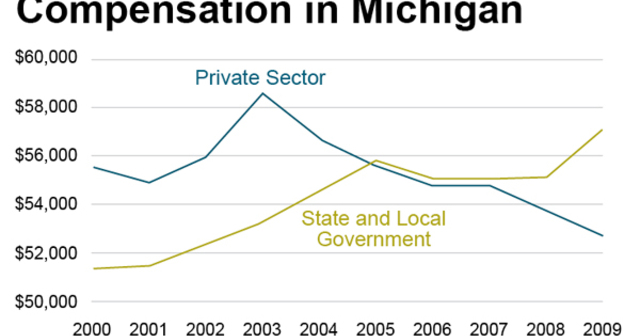 The Paying Class vs. the Government Class

As summer approaches, Michigan politicians will ramp up their pre-election posturing — attending parades, kissing babies and introducing "dead on arrival" legislation on hot-button issues. This shouldn't distract Michigan voters from recognizing that part of the reason Michigan faces yet another budget overspending crisis is the extraordinary expense of employing these politicians and a veritable army of government employees.

Peg Dunlap and Ron Cunningham of the St. Andrews Society of Detroit testify Dec. 12, 2009, before the Michigan House Government Operations Committee where legislators discussed whether or not Michigan should adopt an “official Scottish state tartan.”

Here's the bottom line: Members of the government class aren't just staying even with their private-sector counterparts; their relative status is improving.

A big part of the difference is public employees' benefits. If all of Michigan's state and local government and public school employees received benefits equal to private-sector averages, taxpayers here could save $5.7 billion annually. This is enough to eliminate the hated Michigan Business Tax and surcharge and still have $3.3 billion per year left over for classrooms, roads and personal income tax relief.

Michigan's full-time legislators have also provided themselves with exceptional levels of compensation, although it totals only a small fraction of state government spending. Our lawmakers' compensation is the nation's second highest at nearly $80,000 a year plus an annual $12,000 expense account. This does not include additional perks, such as health care and retirement benefits. In contrast, Florida, with a population almost twice as large as Michigan's, pays its legislators $31,932 a year. The Texas Legislature, which meets a maximum of 140 days every other year, pays lawmakers just $7,200 annually.

Can anyone seriously argue that Texas is worse off than Michigan because its lawmakers do not introduce legislation on a year-round basis?

Since hiking taxes $1.4 billion in 2007, our legislators have busied themselves with such serious matters as introducing measures to mandate full-service gas station service; to designate an official state Bo Schembechler Day; and to establish an official state Scottish Tartan.

Although unlikely to become law, one bipartisan bill cosponsored by 19 state representatives in January 2009 would entitle deceased lawmakers to a State Police escort — paid for with tax dollars — on their trip to the grave. Such actions give new meaning to the term "public servant."

In addition, every state representative is allowed two full-time staffers, and every senator, four to six. These people also have it pretty good. On top of their salaries and health benefits, they receive eight hours of leave time for each two-week pay period — 26 days a year. They also get another 11.5 formal holidays, including Veterans Day and Martin Luther King Jr. Day, which are not often enjoyed by private-sector workers.

Full-time state government employees earn average salaries of almost $53,000 per year, according to the latest state "Annual Workforce Report." They also receive benefits equal to approximately $31,000. These public-sector employees use an average of 9.6 sick days per year. In contrast, federal Bureau of Labor Statistics data show that private-sector workers are offered (and do not necessarily use) an average of just eight sick days per year.

A 2007 Mackinac Center essay titled "What Price Government?" provided similar comparisons. The paper cautioned that the figures didn't always compare apples to apples, because governments may need to employ people who are more highly trained, and whose higher compensation skews the average upward. However, comparable job-to-job comparisons still showed state employees doing better. Indeed, given that 29.4 percent of state employees work for the Michigan Department of Corrections — a workforce containing more prison guards than highly trained technocrats — the raw comparisons of public- and private-sector averages is still revealing.

Government employee compensation figures suggest that a de facto class war is underway between public-sector and private-sector workers. This coming election season would be an appropriate time for the private-sector's "paying class" to demand that politicians bring compensation levels for the government's "privileged" class in line with the rest of society. Michigan can't afford the amount of government it currently has, and one way to make the necessary adjustment is to normalize government compensation schedules — not kiss more babies.