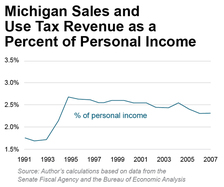 Ask Michigan legislators right now whether there will be a tax increase this year, and they're likely to say the same thing: A tax increase is dead this year. But Gov. Jennifer Granholm's proposal to extend Michigan's current sales tax to services will be under consideration until the governor leaves office in December, and it will become more attractive to legislators as Michigan's balanced budget deadline of Oct. 1 looms closer. Michigan taxpayers should therefore know that this bad policy idea is based on phantom facts.

The stability of Michigan’s current sales tax should warn state legislators away from enacting the governor’s new tax proposal.

Consider that the state has the highest unemployment rate in the country and is in the bottom 10 states in per-capita production — down from 19th place just a decade ago. Nevertheless, in the past year, Michigan's treasury has been outperforming Michigan's economy. The state's tax revenues dropped 4.9 percent in 2009, but the state shed 6.9 percent of its jobs.

The governor has often promoted the tax by trying to claim Michigan is below average in the number of services the state taxes. But the data she uses can't sustain her argument. Her figures on sales taxes on services come from the National Federation of Tax Administrators, which considers only 168 services in its analysis and notes, "The list of services in this survey is not a comprehensive list of all services that can or should be taxed."

The reason the NFTA's list is not comprehensive is because the economy is complex, changing and largely outside of governmental control. There are more than 9,000 service-industry classifications, according to the Federal Office of Management and Budget. Thousands of services are provided in Michigan's economy. Mark Perry, a Mackinac Center adjunct scholar, regularly gathers data on new services being developed, from universities that outsource the grading of term papers to people who hire professionals
to break up with their boyfriends or girlfriends.

The NFTA selected services in an attempt to get a good sample, but it's difficult to tell whether it is truly representative of how states approach sales taxes on services. For instance, even though Michigan's sales tax is generally a tax on retail goods, a lot of services wind up being tapped for sales tax revenue anyway. Just look at your cell phone bill to verify this. Most states have applied their sales taxes that way.

Indeed, enacting a service tax would make Michigan unusual. According to the Washington, D.C.-based Tax Foundation, only five other states generally tax services: Hawaii, New Mexico, Mississippi, South Dakota and West Virginia (not all of them state this explicitly in their statutes).

These states make it possible to check whether a service tax would live up to its promises of stability and better reflect the changing economy. As it stands, states with a service tax have actually experienced a relative decline in sales tax revenue. Taken as a whole, sales tax revenues in these states fell from 3.4 percent of the personal income to 3.1 percent between 2000 and 2009.

The sales tax is robust because it has little to do with the fate of Michigan's major manufacturers. Sales taxes are enacted on what Michigan residents purchase, not on where they work. And the batch of goods that Michiganders purchase has been largely unchanged for the past two decades. Residents generally spend more on golf carts, jet skis and health insurance and less on newspapers. A giant shift away from consuming goods to consuming services has not been evident in the numbers.