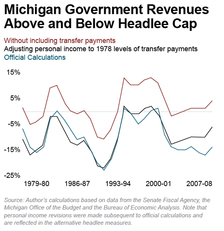 The idea that Michigan tax revenues are declining faster than the private economy is a well-worn talking point among tax hike proponents. For example, in the introduction to its report on possible reforms, the "Legislative Commission on Government Efficiency" stated that Michigan's tax system "is no longer appropriately linked with the state's current resources/tax base."

The piece of evidence often cited is the fact that since 2001, state revenues have fallen increasingly short of the 1978 Headlee amendment's state revenue limit, which caps state tax revenues at 9.49 percent of total personal income of Michigan residents. But apart from excluding the large increases in federal revenue to Lansing, the state uses a benchmark that improperly measures what Michigan taxpayers can afford. When the limit is adjusted to exclude government transfer payments the state winds up taking more than $1 billion above the limit, despite the fact that actual state tax and fee revenues are currently some $8 billion below the cap.

The state is getting a growing percentage of the private resource base, and any proposed tax hikes would only shrink the private sector.

Personal income measures all the money obtained by every resident of the state from payroll compensation, returns on capital (as measured by dividends, interest and rent) and transfer payments (primarily funds received from government programs like welfare, unemployment insurance and social security). When the Headlee amendment was adopted in 1978, transfer payments accounted for 11.2 percent of state personal income. Today, they constitute 18.8 percent.

The intent of the Headlee revenue limit was to ensure that state government did not grow faster than the private economy. While income that individuals receive from work and investments are reasonable indicators of their ability to pay more taxes, money they collect from different arms of the welfare state is a different matter. It is not a sign that tax burdens are more easily borne.

Also, the wages and salaries component of "personal income" are people's gross pay — your paycheck before all the deductions for FICA and income taxes and the like are taken out. Those payroll deductions are also the source for most of the transfer payments included in the aggregate personal income figure. Wages and salaries are already burdened by these social welfare programs, so including both the payments and the payouts themselves is a clear case of double-counting.

So, what if state personal income — the basis of Michigan's constitutional cap on state government revenue — did not include these social welfare programs? The accompanying chart shows striking results.

Perhaps more important than the question of whether the state is above or below the limit, is whether the tax burden is increasing compared to the private sector. Since 2001, there has been an upward trend in personal income minus transfer payments. Proponents of tax hikes often claim that the decreasing share of revenue is evidence that the tax system is "broken," but if that were the case, it was broken in 2000 and fixed by 2002. It appears that the state is getting a growing percentage of the private resource base, and any proposed tax hikes would only shrink the private sector.

Total state revenue has grown substantially in spite of the fact that the Headlee-restricted revenue has increased more slowly. It is true that personal income has increased at a greater rate than state revenues, but the reason is not that Michigan residents are wealthier and more prosperous. The reality is that the state's system of collecting taxes and fees has been more generous to the government than to taxpayers.