The Expensive Mystery of “Project Cherrywood” 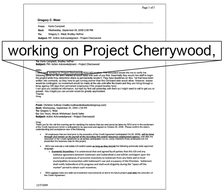 In January 2008, theatergoers were treated to a monster movie with a novel premise: a supposedly uncut amateur video of what turns out to be a Godzilla-like creature attacking Manhattan. The film begins with an official-looking Defense Department header describing what follows as footage recovered from a camcorder found at the scene of "Case Designate Cloverfield." The anodyne code name added to the mystery of a monster that viewers never really get a good look at.

One gets a similar feeling from what might be called "Case Designate Cherrywood," with "Cherrywood" being the nickname used in e-mails for a plan to secure $2 million in refundable Michigan Business Tax credits for a Service Employees International Union subsidiary known as the Member Action Services Center. As with "Cloverfield," one is left wondering just what one saw: a payoff to a political ally or just a bad idea doggedly followed to its logical conclusion?

This wouldn’t be the first time a state agency has bent over backward to grant a dubious award to a union.

In Cloverfield, the mystery was entertaining. In Cherrywood, the mystery is less visually exciting, but should be more disturbing. Taxpayers will be paying for a tax break — which may turn into a significant cash refund — to a powerful and well-connected public-sector union. The SEIU already benefits from its legal status as the workplace representative for more than 12,000 state employees, and annually receives more than $6 million in membership dues and agency fees — all effectively guaranteed and collected by Michigan government.

There are at least two problems with this deal. First, did the tax write-offs compromise the union? About two weeks after the Michigan Economic Development Corp. announced its decision to award the tax credit, SEIU Local 517M agreed to revise its contract with the state and make concessions, accepting a less-expensive health care plan for new employees and agreeing to a two-year wage freeze. These concessions were controversial; at least one other union representing a different group of state employees announced it would not follow suit. Even if there was no explicit quid pro quo, the tax break for the union subsidiary might have made the pay cut easier for SEIU officers to swallow.

Second, the Member Action Service Center will supposedly provide administrative support, such as grievance intake and record keeping, for union locals. But taxpayers know little about what the SEIU will do with the office space and equipment that the taxpayers' "generosity" will allow them to rent or buy. The computer networks, photocopying machines, conference rooms and telephones will still be available after hours, and the temptation will be strong for SEIU to use these same state-supported resources for organizing campaigns, political activism, fundraising and get-out-the-vote efforts.

How the grant came about also raised eyebrows. Since the Service Center did not exist until Oct. 22, the SEIU appears to have applied for a grant before the recipient was even incorporated. In addition, while the MEDC's briefing document says the SEIU was considering locations in Missouri and Florida, it does not appear that MASC filed applications to transact business or apply for economic development subsidies in either of those states.

This wouldn't be the first time a state agency has bent over backward to grant a dubious award to a union. The Mackinac Center Legal Foundation is pursuing a case in which home-based child care providers, who run their own businesses, were corralled into something called "Child Care Providers Together Michigan," a union organization created by the UAW and American Federation of State, County and Municipal Employees. Since the parents of some of the day care children that these entrepreneurs care for receive government subsidies, the Michigan Department of Human Services is diverting money from the subsidy checks — $3.7 million annually — to the CCPTM in the form of union dues, in spite of the fact that collective bargaining is completely improper for independent business owners

Between the $2 million in refundable credits for the SEIU and the $3.7 million in "employee union dues" hauled in by the CCPTM, unions are enjoying a windfall on the taxpayers' dime. Most of the moviegoers who sat through the shaky camerawork of Cloverfield probably enjoyed the sense of mystery. Cherrywood is a lot less entertaining and Michigan residents deserve better explanations than they have gotten.

Paul Kersey is director of labor policy at the Mackinac Center for Public Policy, a research and educational institute headquartered in Midland, Mich. Permission to reprint is hereby granted, provided that the author and the Center are properly cited.