How to Find and Eliminate Wasted State Money

Font size:
Scrutinizing every government program with an eye toward waste-elimination will identify strategic improvements.

With sales tax revenue down 12.4 percent from a year ago and increased spending pressures for Medicaid and public employee compensation, the governor and Legislature once again face a self-created overspending crisis in the fiscal 2011 budget. The 2010 budget included cuts to public safety and education designed to give the impression that state government has been cut to the bone. It has not. But the state may have trouble achieving savings because it has not systematically investigated its spending to identify waste.

The many types of government waste can be placed on a "Government Waste Taxonomy" tree chart. It's a way of classifying and approaching any line item, program or function of government to identify waste — that is, where government spends more money than necessary. 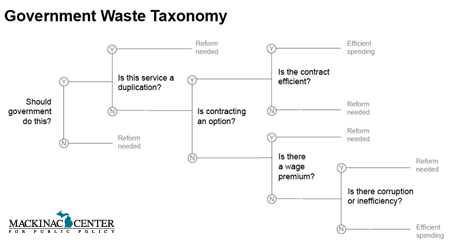 The process begins with a question rarely asked or definitively answered by those in government: Is this something the state needs to do? Addressing waste considers the means and the ends of the program.

To her credit, Gov. Jennifer Granholm cut a number of programs, citing their lack of strategic necessity. For instance, her executive budget called for an end to state fair subsidies, stating that "state fairs are not an essential purpose of government." She stuck to this idea, proposed by Mackinac Center scholars well over a decade ago, by vetoing state fair funding in October.

Even if a program is deemed appropriate, the state can still waste money implementing it. The first question is whether a function is duplicative of another government entity or service.

The state is replete with examples. Michigan operates its own wetlands regulation regime, which is conducted by the Army Corps of Engineers in 48 other states. Letting the federal government take over the program would save up to $2 million annually.

Michigan also has a number of state parks that offer little of the natural or historic interest the park system was instituted to preserve. Selling these to private owners would result in both savings and an influx of cash.

There is also "in-house" waste. Governments often pay a premium by providing services themselves instead of contracting for them. Consider the use of state police to patrol Michigan highways; the state could save $65 million annually by contracting this service with county sheriffs' deputies who have lower wages and benefits.

For private contracting to produce savings, however, state officials must secure the best deal. Michigan recently re-bid one of its largest contracts, a $2 billion contract for prescription drugs, to two different companies. Its previous vendor sued the state, but an appellate court ruled that it did not have standing to bring the suit. One judge, however, added that he was "disturbed by the apparent deficiencies in defendants' [the state Department of Management and Budget] procurement process for these contracts."

Waste can also take place in government employee compensation. The difference between the market rate and what the state currently pays is generally waste. This can occur through legal mechanisms like prevailing wage laws, or as a result of collective bargaining negotiations establishing higher wages and benefits. If Michigan public-sector benefits were benchmarked to the average private sector benefit level, the state would save an estimated $5.7 billion annually.

Then there's simple inefficiency. Like private-sector enterprises, the state should employ practices and incentives that allow agencies to find better office costs, improve fleet usage, use less paper, trim departmental budgets and determine other efficiencies that will save taxpayer money.

Scrutinizing every government program with an eye toward waste-elimination will identify strategic improvements. Piecemeal efforts have been made, but until a vigorous assessment of any of these programs is completed, it is impossible to show that any money used in state government is well-spent.

James M. Hohman is a fiscal policy analyst at the Mackinac Center for Public Policy, a research and educational institute headquartered in Midland, Mich. Permission to reprint is hereby granted, provided that the author and the Center are properly cited.