The Source of the School Budget Quagmire 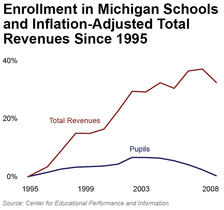 Scores of Michigan school districts are facing budget problems, and the blame is falling on this year's "draconian" state school aid cuts and on Michigan's "unpredictable" school funding system. Schools are now said to be underfunded.

But the record shows that Michigan's schools have been generously financed for years. This suggests policymakers should stop focusing on school revenues and instead encourage schools to control their costs.

Michigan's public school system has received increased revenues — even after adjusting for inflation — nearly every year since the state's voters passed Proposal A, the constitutional amendment that guides Michigan's school funding system. From 1995 until 2008, inflation-adjusted total revenue for Michigan schools grew by nearly one-third, according to data from the Center for Educational Performance and Information. With virtually the same number of pupils today as in 1995, per-pupil revenue rose accordingly. In constant 2008 dollars, Michigan schools on average received about $3,000 more per student in 2008 than they did in Proposal A's first year.

Still, some point to recent revenue declines in the state school aid fund — the schools' primary source of income, and the repository of taxes from Proposal A — and call for an overhaul of Michigan's school funding system. This argument, too, is questionable: The school aid fund has grown 18 percent above inflation since 1995.

The reality that schools would experience some level of decreasing revenues during an economic recession should surprise no one. No matter what funding system is in place, revenues for public schools will eventually wane as the economy wanes. Attacking Proposal A's funding mechanism for not being immune to economic reality is specious.

Consider the performance of Michigan's economy since the passage of Proposal A. Inflation-adjusted per-capita personal income in the state has grown by less than 6 percent since 1995. This growth is the worst of any state in this period and is a stark contrast to the increased revenue flowing
to schools during the same period.

It's quite remarkable that schools haven't suffered large funding cuts in recent years. Ironically, one reason they've been protected is Proposal A's diverse revenue streams. While real sales-tax revenue for schools has declined slightly in the last decade, inflation-adjusted school revenue from income, use, real estate, state property and casino taxes — all introduced since Proposal A — has grown. Schools now rely on more than a dozen different taxes funneling into the school aid fund, and this has meant that state tax revenues for schools have not fallen dramatically, even though the tax revenues have decreased somewhat on balance.

Still, if inflation-adjusted state tax revenues for schools have declined, why has the schools' overall funding increased? The answer is generous increases in federal and local funding, which are secondary revenue sources for the schools. Since Proposal A, accounting for inflation, local revenue grew by 105 percent and federal revenue grew by 104 percent, enabling the 33 percent real school revenue growth since 1995. Federal revenue in particular — largely from the No Child Left Behind Act of 2001 — has taken on a larger role in paying for schools: a double-edged sword, given the new federal requirements on state schools and Michigan's growing dependence on federal support.

Regardless, all of this adds up to one simple and straightforward point: Michigan is not facing a school funding crisis. At most, Michigan schools are merely dealing with the economic realities of a state in decline. For years, schools have largely been shielded from these realities, and schools overall are much better off than they were 15 years ago. Yet facing modest reductions — most school districts will experience cuts of less than 5 percent — has districts dipping into fund balances and teetering on the brink of bankruptcy.

Herein lies the lesson for policymakers and taxpayers: More revenue for schools won't necessarily stabilize their budgets. Too many districts have failed to control their costs, even with evidence of cost-saving practices like privatizing noninstructional services, consolidating services or having employees contribute more to their own health insurance premiums. State policymakers should look to the expense side of the school ledger if they want to help schools deal with their fiscal problems.