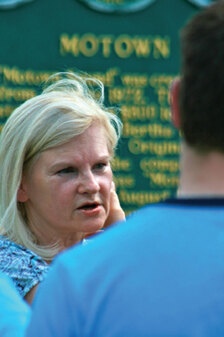 Susan Whithall, music critic for The Detroit News, talks to a group of participants in a July 2009 Students for a Free Economy outing at the Motown “Hitsville USA” building in Detroit.

Coincidentally, I was born the same year that Berry Gordy established the Motown empire in Detroit. Wherever my travels have taken me, it seems that the common cultural denominator has always been Motown. At the White Horse Tavern in Greenwich Village, I was accosted by a group of R&B-savvy Welsh rowdies, while in Stuttgart, Germany, I won a trivia contest in a bar by knowing that Barrett Strong recorded Motown's first hit single, "Money (That's What I Want)."

I was able to win over the Welsh rowdies, incidentally, when I told them I came from Detroit, prompting the near-reverent interrogatory: "Detroit? Do you know Smokey?" By the end of the night, we were standing together, arms thrown over each others' shoulders, singing songs like "Papa Was a Rolling Stone," "Cloud Nine," "Ball of Confusion" and "Psychedelic Shack." And that was just The Temptations!

Bereft of the music of Motown, the world would have lost a powerful shared aesthetic experience.

But don't take my word for it. The Beatles loved Motown and covered The Marvelettes' "Please, Mr. Postman." Bruce Springsteen loved Motown and recorded a blistering cover of Edwin Starr's "War." The Rolling Stones loved Motown and covered "Just My Imagination," among other songs. The Who covered "Baby, Don't You Do It" and "Dancing in the Street." Rod Stewart recorded "(I Know) I'm Losing You." Bob Dylan loved Motown, too, and called Smokey Robinson his favorite poet - not a bad compliment from someone who took his stage name from one of the 20th century's most famous poets.

But most importantly, kids loved Motown. Black and white, rich and poor, educated and uneducated.

The Motown message goes beyond the entrepreneurial spirit exhibited by Gordy. It extends to the warp and woof of the music itself.

The Motown sound was more than just awesomely talented singers, dancers and musicians. The mere existence of Motown was a socio-political phenomenon. The work ethic was strong, and the resulting music reflected that. The performers personified that strength in smoothly calculated dancing to accompany the crooning, spooning and moon-Juning vocal performances.

Motown songwriters knew how to pack an emotional punch. Motown's legendary composers ranged from Robinson and Norman Whitfield to Marvin Gaye, Stevie Wonder and the triumvirate of Holland-Dozier-Holland. Remember, too, that Gordy started his career as a songwriter for the great Jackie Wilson, a legacy that alone should reserve him a place in the pop culture firmament.

At first, these songwriters wrote tremendous tunes that rivaled the best of Tin-Pan Alley or the Brill Building. But they branched out to deal with social and political issues at a time when casualties mounted in Vietnam, war protests turned violent, great leaders were gunned down and the false promises of the Great Society evaporated into thin air.

They also helped ease racial tensions and promote individual liberty while creating the urge to either slow dance or shake a tail feather. Think of Stevie Wonder's "You Haven't Done Nothing," which takes to task those politicians who will say anything to get elected and stay in office. Wonder also handles this theme in the song "Big Brother." In The Temptations' song "Ball of Confusion," they assert: "Vote for me and I'll set you free," and "Politicians say more taxes will solve everything. And the band played on."

Similarly, Marvin Gaye's song suite "What's Going On" deftly handles the devastation wrought by war, with the album's songs reflecting the impressions of Gaye's brother upon his return from the Vietnam conflict. Elsewhere, the album features "Mercy, Mercy, Mercy Me (The Ecology)," an anthem to environmental concerns.

Personal responsibility played a large part in the Motown catalog as well. The Supremes' "Love Child" and The Temptations' "Papa Was a Rolling Stone" both handle the topic in a frank manner.

Bereft of the music of Motown, the world would have lost a powerful shared aesthetic experience, one that conveys the importance of personal responsibility, the foolhardiness of relying on politicians to solve social problems, the real human costs of war and the importance of our environment. What an honor to be born in the same year.

Bruce Edward Walker is communications manager for the Property Rights Network at the Mackinac Center for Public Policy, a research and educational institute headquartered in Midland, Mich. Permission to reprint in whole or in part is hereby granted, provided that the author and the Center are properly cited.