Take a Closer Look at Issues With Canadian Health Care 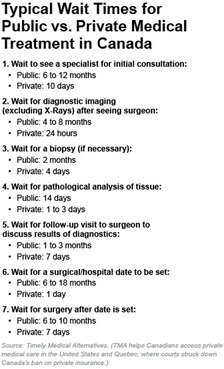 By now, Americans are familiar with the stories of Canadians who would have died because of their government's health care rationing had they not been able to get care in the United States. Perhaps just as troubling, however, are the less dramatic but much more common instances of minor indignities, inequities and inconveniences imposed by the Canadian health care system.

Nearly every Canadian has such stories. Even the experiences of those satisfied with the country's health care system show that residents have resigned themselves to accepting as "normal" the systemic dysfunctions that would deeply trouble most U.S. citizens.

For years the United States has served as a relief valve for the overburdened Canadian health care system.

A typical story comes from Tim Hodges of London, Ontario, who has been taking Ibuprofen for nine months to deal with pain in his arms. He made an appointment to see his primary care physician, who said that Ibuprofen should not be used consecutively for more than two weeks. When X-rays revealed no obvious problems, the doctor asked whether the pain was unbearable. Tim said no and was told to make a new appointment if it worsened — and meanwhile keep taking the Ibuprofen he'd been scolded for relying on!

A minor gripe, but vaguely disquieting given that the doctor is essentially a government functionary. Actually, Tim is fortunate even to have a primary care physician, because the inability to obtain one is among the system's most glaring shortcomings. These doctors act as "gatekeepers," and finding one is a critical first step for obtaining any care outside of emergency rooms or specialized clinics targeted at certain populations.

I'm from Windsor and am lucky not to be among the ranks of the 4.1 million Canadians (about 12 percent) who don't have a primary care physician. The reason I have a doctor and they don't, frankly, is because I have connections.

When my mother began working with a woman whose husband works in the same building as a large medical clinic, this colleague (via her husband) was able to get my mother an appointment with a doctor there. After about a year, my mom managed to get me a spot in the practice, too.

My doctor is a wonderful physician, but she's terribly overburdened. Like most Canadian doctors, she must limit patients to one problem per visit, in part to cope with the sheer volume, and in part because the Ontario Health Insurance Plan only reimburses her on a per-visit basis. This is an example of how government price controls that limit the compensation to health care professionals can create shortages among providers.

So even though I'm one of the lucky ones who has a primary care physician, except for emergencies I still can expect to wait two months or more to get an appointment.

What's troubling is that situations like mine are accepted as "normal" under Canada's single-payer health care system. Even as they defend their system, many middle-class Canadians recount similar tales of using social networks to secure access to timely care, while resigning themselves to long waits for "non-necessary" medical care and diagnostic medicine.

Even more disturbing is the impact of this system on people who lack the ability to use social connections to get around the queues - typically the disadvantaged members of Canadian society.

For years the United States has served as a relief valve for the overburdened Canadian health care system. If a patient's wait time is longer than the legislated maximum, then Canadians are allowed to seek care at American facilities — but only ones that government bureaucrats deem appropriate. This means that a person from Windsor might have to travel to Buffalo for a surgery that could be done in Detroit.

Janet Neilson is a health policy communications associate for the Mackinac Center for Public Policy, a research and educational institute headquartered in Midland, Mich. Neilson writes a daily blog with the latest developments on health care. Her blog can be found at www.MIHealthFacts.com. Permission to reprint in whole or in part is hereby granted, provided that the author and the Center are properly cited.