MEDC Should Become Transparent — or Disappear 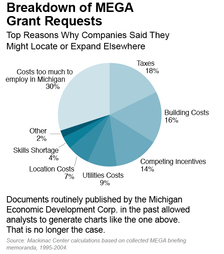 In 1999, the state's official "jobs" department — the Michigan Economic Development Corp. — published a paper titled "Strategic Directions for Michigan's Future: The Next Decade." It read, in part: "The State of Michigan will serve as a model of economic excellence for the rest of the country. Businesses and skilled workers will choose to locate and live in Michigan because of its business climate, quality of life, educational system, technological support, and entrepreneurial spirit."

The past decade has not been kind to this rhetoric. From 1999 through 2008, Michigan was the only state whose economic output declined, and United Van Lines data indicate that people are leaving the state at more than twice the rate they are entering. Thus, it's alarming that the MEDC has become aggressively less transparent over the years.

There appears to be a relationship between Michigan’s rising unemployment rate and the agency’s declining transparency.

Consider one of the high-profile programs the MEDC administers: the Michigan Economic Growth Authority. MEGA was created in 1995 and was designed to hand out targeted business tax credits to corporations that promised to create a specific number of jobs in return. Through 2008, MEGA has offered tax credits of $3.3 billion in more than 500 deals with select businesses spanning as much as 20 years into the future. In the program's early years, data about each of these deals was easy to obtain and utilize. Not anymore.

For example, there was a time when MEGA's annual report to the Legislature — required by state law — ran to 19 pages or more, with each page containing a detailed description of every deal and an accompanying narrative. Today, the report is effectively a two-page spreadsheet.

Moreover, another document MEGA once produced under the MEDC's supervision contained information about other state incentives offered to MEGA's recipient companies, such as the value of state education tax abatements. That report was discontinued after 2001 and replaced by one with far less data.

Calling for the data doesn't often help. The MEDC has not answered basic questions about its operations that I posed more than 10 weeks ago, despite the corporation's spokesperson encouraging me to submit them in writing and promising that "we'll get back to you."

State legislators from both major parties have decried the MEDC's lack of transparency, and the Michigan Office of the Auditor General has criticized the MEDC in the past for significant reporting inaccuracies. Not surprisingly, Senate Bills 71 and 72 in the Michigan Legislature would require the MEDC to provide greater disclosure.

What might drive the MEDC leadership to try burying data or opposing an audit of their job claims? Since there appears to be a relationship between Michigan's rising unemployment rate and the agency's declining transparency, I posit the following: MEDC officials know their programs don't really create and retain the jobs they claim. A thorough audit from the respected OAG might lead legislators to further question the need for the corporation and its funding.

Consider that when Gov. John Engler's final term was coming to an end in late 2002, MEDC leadership went on a "continuity" campaign, using state resources to promote their own usefulness to the state. The number one item on an MEDC brochure listing its objectives for the coming year was to "Ensure the Continuity of the MEDC."

In other words, the jobs they were most concerned about were their own. A fiscal 2002 MEDC budget document actually contained a line item called "MEDC Continuity" for $521,000. Only $44,600 was spent the next year. Once Gov. Jennifer Granholm had made it clear she intended to keep the agency around, there was no need for such expenditures.

Tracking the progress of the MEDC and of MEGA is particularly important in light of Michigan's economic performance during the last decade. Michigan was ranked 16th among the 50 states in per-capita state GDP in 1999, the year the MEDC was formed and began to administer MEGA; since then the state has tumbled to 41st. Michigan also continues to lead the nation in unemployment, registering 15 percent in August.

Against this backdrop, state policymakers will need to address the MEDC's growing lack of transparency — or consider ending the agency altogether.

Michael D. LaFaive is director of the Morey Fiscal Policy Initiative at the Mackinac Center for Public Policy, a research and educational institute headquartered in Midland, Mich. Permission to reprint is hereby granted, provided that the author and the Center are properly cited.