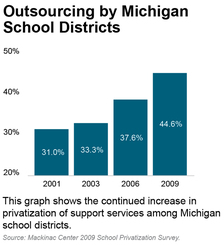 More Michigan public school districts contracted out in 2009 for at least one of the three main support services — food, custodial or transportation — according to the Mackinac Center for Public Policy's annual privatization survey. Some 246 of the state's 551 districts, or 44.6 percent, contract with private companies for one or more of those support services, up from 42.4 percent a year ago. The Mackinac Center has surveyed Michigan school districts since 2001, when 31 percent of districts contracted out for one of the "big three" noninstructional services.

The Mackinac Center was able to receive and confirm responses from every district this year, marking the third time that 100 percent of school districts cooperated with the survey.

Per-pupil savings estimates from privatization are significant as the state Legislature discusses reducing the state aid foundation grant by $110 per pupil.

There was a significant increase in transportation contracting as well. There are now 38 districts that have hired private contractors for regular transportation services, up from 32 districts last year. Benton Harbor Area Schools is privatizing the service and estimates it could save $2 million over the next five years, an average of $113 per pupil annually.

Districts are not mandated to provide transportation services, and some districts have stopped providing it completely to save on costs. River School in Berrien County is one, while other districts, like Grosse Pointe Public Schools, have never offered them.

While the Mackinac Center's 2008 survey showed a decrease in food service contracting, it increased in 2009 with a net gain of one district. Contracting for personnel and/or management in food services remains the most frequently used money-saving option with 29.4 percent of districts participating. Glenn, Troy, Charlevoix, Sims, Okemos, Peck and Godwin Heights districts all began new food service management agreements.

District officials also commented on other ways they save on food services. Blissfield and Adrian expect to save $18,000 each by sharing a food manager. While there are new districts consolidating their food service programs, other districts have done so for a while. Swan Valley and Saginaw have shared food service for over nine years.

The district that saved the most from privatization this year was the Troy School District, which contracted out for food, custodial and transportation services. Troy expects to save $3.8 million in the first year alone, or $310 per pupil. The largest savings come from custodial services, at $2.7 million. While custodial contracting sometimes involves layoffs, Troy's contractor expects to hire the equivalent of 22.5 more workers to serve the district. Troy also expects its food service provider to run the program at a surplus of $414,625. Under last year's in-house staff and management, the district spent $100,000 more than revenues when indirect costs were considered. The district also privatized its transportation services and expects to save $7.4 million over the next six years.

The Mackinac Center was able to receive and confirm responses from every district in the state this year, marking the third time that 100 percent of school districts cooperated with the survey.

Despite obstacles, especially from unions afraid of losing dues-paying members, privatization continues to increase in popularity for school districts trying to save money.

James M. Hohman is a fiscal policy analyst and Eric R. Imhoff, a senior majoring in economics at Northwood University, is a research intern at the Mackinac Center for Public Policy, a research and educational institute headquartered in Midland, Mich.Permission to reprint is hereby granted, provided that the author and the Center are properly cited.