Massachusetts Should Not Be Michigan’s Role Model 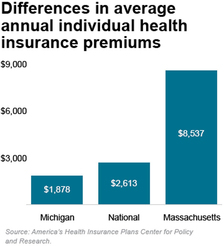 Michigan has an opportunity to become a leader in health insurance reform. State legislators know this and are pushing to see state-level reforms passed before Washington implements its national plan. They should be commended for taking the initiative and pushing for bottom-up solutions, but caution is advised lest unintended consequences of some proposals far outweigh any potential benefits.

At 11 percent, the Great Lakes State's uninsured rate is below the national average, and insurance premium prices compare well with other states. Nevertheless, some people are still priced out of the market. As such, it's troubling that many of the provisions proposed by Michigan policymakers would actually increase the cost of health insurance.

One monumental reform is not on the table: Repealing a prohibition on residents purchasing health insurance from providers licensed in other states. This measure would vastly increase both the competition and consumer choice in a state market dominated by one company, Blue Cross Blue Shield of Michigan, which reportedly claims some 70 percent of the market.

Instead, the proposals being promoted resemble the policy mix first attempted in Massachusetts. While held up as a model by some, the Bay State's overhauls have generated serious problems.

For example, health insurance premiums in Massachusetts increased sharply in the wake of the "Romney Care" plan adopted in 2006. Although Massachusetts' uninsured rate is low, this is largely because of state subsidies that have proven much more costly than anticipated. That should raise a red flag for Michigan, which already is facing a state government overspending crisis of $1.6 billion.

Additionally, despite hopes that the Massachusetts plan would reduce health care costs, they are instead ballooning, generating ever-deeper deficits. Even these steadily climbing costs — up from $158 million in its first year to $1.3 billion in 2009 — are not enough to fund Massachusetts' commitment to universal health coverage. The state is instead cutting eligibility for its programs for some 30,000 legal immigrants.

Massachusetts has also restricted residents' choices, effectively outlawing basic policies with more limited coverage or higher deductibles, even though these are a proven strategy for dramatically lowering monthly premiums. The state's restrictions have contributed to skyrocketing insurance costs.

The Bay State also suffers higher costs due to a "community rating" mandate that existed before the 2006 initiative. This mandate allows people to wait until they get sick before buying insurance, meaning they don't pay into the system before accepting payments from it. One of the two health care proposals before the Michigan Legislature, House Bill 4934, would impose this disastrous policy on Michigan.

As more people in Massachusetts are covered by insurance, and as caps on payments to providers are implemented, there is some evidence that Massachusetts doctors are putting limits on or not accepting new patients. Since the beginning of "Romney Care," the average waiting time for a doctor's appointment in the state has increased from 33 days to 52 days only a few years into the reforms.

This is no surprise. Higher government involvement in health care inevitably leads to rationing of care. Massachusetts is now considering a cap on total health care spending — a step that would necessitate rationing.

Clearly these aren't the results that Michigan — or the nation — is looking for.

If Michigan's legislators want to be leaders in health policy reform, they can start by recognizing that Michiganders are the best judges of what insurance is best suited for them. Rather than increasing mandates and reducing insurance options, the state should instead allow out-of-state insurers to provide real competition in the health insurance market.

Janet Neilson is a health policy communications associate for the Mackinac Center for Public Policy, a research and educational institute headquartered in Midland, Mich. Neilson writes a daily blog with the latest developments on health care, which can be found at www.MIHealthFacts.com. Permission to reprint in whole or in part is hereby granted, provided that the author and the Center are properly cited.