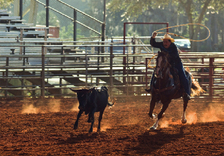 If you've ever watched rodeo — I don't pretend to be a cowboy, but I've seen enough to get the general idea of things — then you've probably seen an event called calf roping. In this contest, a calf is let loose to run around the ring. A rider on horseback throws a lasso around the calf's neck, jumps off his horse and then ties up the calf's legs, rendering the animal immobile. Since the cowboy hardly ever fails to catch and tie up the animal, the competition centers on who can do it the fastest. Calf roping isn't quite as dangerous or exciting as bull riding, but it looks like it might be fun for the cowboy, if not so much fun for the calf.

If anything, the law for unions should look more like bull riding — workers who for whatever reason don’t want a union boss on their backs should be free to run and kick and buck until they throw him off.

Calf roping also serves as a pretty good analogy for the Employee Free Choice Act, a bill that labor unions have made their prime goal for this term of Congress. EFCA seeks to reduce workers to the role of helpless calves to be lassoed and tied up by union organizer cowboys.

The final form of EFCA is still up in the air, but if passed, it will probably feature two provisions. The first will be some mechanism for installing unions in workplaces where union support is relatively weak. Union officials would have preferred "card-check," which replaces secret-ballot elections with a signature-gathering process that is ripe for abuse. But it looks like they will probably settle for a quick election procedure, along with new restrictions on workplace meetings that will prevent employers from making their case against unionization while union organizers will have the right to enter the workplace and accost workers there. Either way the result will be lots of newly unionized workplaces. That's the lasso part.

The rub is that actual union support in those newly unionized companies will be shaky, and workers can remove an unwanted union through a process known as decertification — as long as there isn't a contract in place. Furthermore, unions don't start collecting dues from workers until they have an agreement. That's where the second part, the tying, comes in: binding arbitration. Under EFCA, a union can call in a government arbitrator to impose a settlement if the union can't reach one with the employer. On the surface, that looks like a restriction on employers, but it is liable to affect workers too. An arbitrator's ruling will almost certainly be treated the same as a contract for purposes of blocking decertification, and arbitration rulings are almost guaranteed to include forced-dues provisions in states where those aren't blocked by right-to-work laws. Like a rope tied tight around a calf's legs, binding arbitration ties down workers so they can't go anywhere.

It's a great deal for the cowboys, but not so great for the calf. At least in a real rodeo, the contestant has to get down from his horse and tie the calf up himself. In the EFCA rodeo, the law ties up the poor animal for him.

American workers deserve better than that. If anything, the law for unions should look more like bull riding — workers who for whatever reason don't want a union boss on their backs should be free to run and kick and buck until they throw him off. Unlike rodeo bull riding, where organizers seek the most aggressive animals in order to challenge the riders, in the real job market a lot of workers will be quite comfortable with a union. And that's OK. Workers should be free to have a union if they want one. But we should not make it easy for unions to corral workers who don't want a union, and EFCA makes it too easy.

Rodeo, after all, evolved out of the work of cowboys, whose job was to keep cattle together until they were taken into town and slaughtered for beef. The whole point of calf roping was to capture a calf that had broken away from the herd. Nothing against cowboys, but working Americans deserve more respect than we give to cattle.