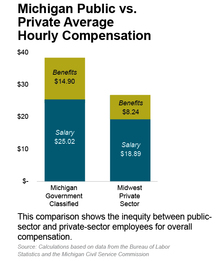 It is no secret that Michigan's economy is doing poorly. The state's unemployment rate is the highest in the country, and at 15.2 percent it is higher than it has been since the 1980s. But the lost jobs and lower incomes of the recession are not shared evenly by everyone in Michigan. Indeed, looking at the numbers reveals our state and local government employees, while not immune to a wayward economy, have been relatively unscathed. State and local governments can save money by addressing this disparity, especially considering just how large the gap has become.

Public-sector employees receive $5.7 billion more in annual benefits than if they were compensated at private-sector rates.

According to calculations based on data from the Bureau of Labor Statistics and figures from the Michigan Civil Service Commission, Michigan's state and local government full-time employees are getting $5.7 billion more in benefits than they would if they received benefits equal to those of private-sector employees.

According to the BLS, Michigan's private sector has shed 12.1 percent of its jobs since 2000. The number of jobs lost — 484,200 — is about the size of the total employment in Rhode Island. But the blows to Michigan's public sector have been much lighter. Local government employment dropped 6.1 percent, while the state government and state enterprises like universities actually expanded their workforce.

The greatest inequity, however, exists not in wages but in the benefits paid on top of already elevated salaries. In 2000, Michigan's civil service workforce received benefits worth an additional 37.95 percent of salary. By 2008, that figure had grown to 58.15 percent. At the same time, Midwest private-sector benefits, the closest estimation for Michigan private-sector benefits available from the BLS, are worth 43.62 percent of salary — meaning that government rates are 33 percent higher than private ones.

As the BLS lacks Michigan-specific benefits data, there are a few calculations necessary to estimate the total value of the difference in benefits. First, Michigan's private sector is believed to receive compensation equal to that of the Midwest private sector. Michigan is part of this BLS region, which includes Illinois, Indiana, Ohio and Wisconsin. Also, state and local government employees were assumed to receive compensation equal to that of state classified employees. While an ideal comparison would include only Michigan information on private-sector benefits and include a total dollar value for Michigan public-sector benefits, such figures are unavailable and must be imputed.

Multiplying the dollar benefit disparity by the number of full-time Michigan state and local government employees listed by the Census Bureau shows that public-sector employees receive $5.7 billion more in annual benefits than if they were compensated at private-sector rates.

Unfortunately, this gap is growing. Between 2002 and 2007 — the most recent year available — the difference grew by $2 billion.

While Michigan's public employees typically receive higher retirement benefits, much of the extra cost of their benefits comes from public-sector health insurance policies generally having lower deductibles and co-pays than private-sector plans. This extra cost, however, is unlikely to result in improved health outcomes for these employees. They use the same doctors and hospitals as everyone else, and the best evidence on high-deductible policies (the Rand Corp.'s Health Insurance Experiment) found that while they do lower the amount people spend on health care, they do not affect health outcomes.

The people of Michigan have a government that is supposed to serve them, not the other way around. With the state's accelerated economic decline, its shrinking number of private-sector workers can no longer afford paying an extra $5.7 billion annually so public-sector workers can have a more comfortable lifestyle than they do, especially in light of state government's current $1.6 billion budget overspending crisis.

James M. Hohman is a fiscal policy analyst and Adam C. Rule, an industrial engineering major at the University of Illinois, is a research intern at the Mackinac Center for Public Policy, a research and educational institute headquartered in Midland, Mich. Permission to reprint is hereby granted, provided that the author and the Center are properly cited.