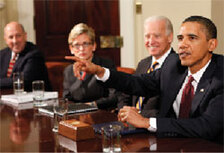 Under the leadership of President Barack Obama, the debate about the future of America's health care system is off and running. Unfortunately, a speech he gave to the American Medical Association on June 15 suggests that the president may be misinformed regarding the practical implications of some of his reform proposals.

President Obama argued that if costs and premiums can be brought under control, coverage can be made universal. Every person of goodwill shares these goals. The specific proposal he's offered, however, pushes the country toward an outcome that he himself says he does not favor — a single-payer, government-run health care system.

Increasingly popular patient-centered alternatives such as Health Savings Accounts fix this by reconnecting consumers to the cost of predictable, routine health expenses with higher insurance deductibles.

The centerpiece of President Obama's health care proposal is a so-called "public option" government-run health insurance plan, which essentially means expanding Medicare to cover people of all ages. Rarely mentioned is the fact that Medicare currently caps compensation paid to health care providers at below-market rates. Hospitals and doctors have no choice but to offset the resulting losses by raising the amount they charge patients covered by private insurers. The bottom line is, for every price control imposed by a government insurance plan, premiums can be expected to rise for those who retain private coverage.

Moreover, the president proposes mandating that employers provide health insurance for their employees. Yet like other laws that raise the costs of employing a worker, such mandates inevitably result in one of three outcomes: lower wages now, lower wages in the future or the loss of jobs. With the nation's highest jobless rate, it's difficult to see how making it even harder for employers to add or retain jobs will benefit Michigan.

President Obama has also promised to ban the practice of insurance companies refusing to insure patients with pre-existing conditions. (In Michigan such individuals can get Blue Cross Blue Shield coverage for those conditions after a wait of six months.) Yet if private insurers are forced to take on patients who get sick but have not previously contributed by paying coverage premiums, they will have no option but to raise rates significantly to cover the additional claims costs.

In addition, if an individual can wait until he or she is sick before buying insurance, then it can hardly be called insurance — "welfare" would be the correct word. One solution being discussed by Congress is a mandate that every individual carry health insurance. Michigan, however, has mandated that every driver have auto insurance, yet the state still has a significant uninsured motorist population. Apart from the personal freedom concerns, this experience indicates that an individual health insurance mandate is highly problematic.

A related problem is the fact that for individuals with chronic bad health or certain pre-existing conditions, the cost of insurance can be prohibitive. To address this, states either provide "high-risk pool" insurance subsidies or, like Michigan, have a tax-exempt "insurer of last resort" such as BCBS. Ongoing controversies regarding BCBS rate hikes give an indication of the challenges involved in containing costs for these patients.

President Obama says he opposes a single-payer insurance system. He should therefore be concerned that this offloading of costs onto nongovernment insurers may drive them from the market altogether, making his "public option" the only option for American health insurance. In other words, creating a government-run, single-payer health care system.

There is a better way. Health care costs rise rapidly largely because our current third-party administrator system "insulates" consumers from actually knowing the cost of their care. Increasingly popular patient-centered alternatives such as Health Savings Accounts fix this by reconnecting consumers to the cost of predictable, routine health expenses with higher insurance deductibles, while simultaneously providing IRA-like savings accounts from which to pay these costs. The result is lower overall costs because frugal consumers are rewarded for their economizing, and providers have sharpened incentives to innovate, become more efficient and add value.

The reforms currently under consideration in Washington, D.C., actually move in the opposite direction, almost certainly making their supposed $1 trillion price tag a low-ball estimate. Rather than "blowing up" our entire current health care system, Congress should slow down and focus on narrower solutions to a problem President Obama has identified, which is too many people without health insurance.

Janet Neilson is a health policy communications associate for the Mackinac Center for Public Policy, a research and educational institute headquartered in Midland, Mich. Neilson writes a daily blog with the latest up-to-date developments on health care for Michigan and the United States. Her blog can be found at www.MIHealthFacts.wordpress.com. Permission to reprint in whole or in part is hereby granted, provided that the author and the Center are properly cited.