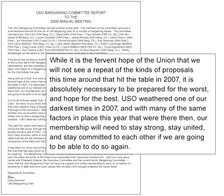 Documents such as this one show the strained management-labor relationship the Michigan Education Association has with its unionized professional staff.

One might expect that a union would be a model employer: progressive in policy, generous in pay and benefits, sharing a commitment to the well-being of working folk and inspiring complete loyalty from employees. In short, one would think that if there was a workplace where workers would not see a need to unionize, it would be at a union.

And one would be wrong.

Staff at the Michigan Education Association, its health insurance arm (Michigan Education Special Services Association), and its financial services affiliate (MEA Financial Services), are represented by no fewer than nine separate entities, most of which are affiliates of the United Staff Organization, a union that specializes in bargaining on behalf of employees of government school unions. A perusal of the USO's Web site provides a fascinating look into the mindset of the people behind what is arguably Michigan's most influential union.

The MEA, in the final analysis, is not here to assist the schools in their mission of educating children.

The USO itself mimics the MEA in a lot of ways. The MEA can be a harsh critic of school districts that don't give in to its demands. Similarly, the USO takes its own potshots at the MEA. In anticipation of the next round of contract negotiations, the chairman of the USO Bargaining Committee reports that: "While it is the fervent hope of the Union that we will not see a repeat of the kinds of proposals this time around that hit the table in 2007, it is absolutely necessary to be prepared for the worst, and hope for the best."

Looking back as he prepares for the end of his tenure as chairman, he then observes that, "The past four years have been a mixture of highs and lows, from the unbelievably anti-union positions taken during the last round, through the divisiveness that the settlement created, to the solidarity that was, is, and always will be a part of USO."

MEA and MESSA, for their part, are portrayed as ordinary employers protecting their own interests, even if that creates difficulties for their staff. In a newsletter, the USO warns its members that, "Everything on your company computer is not private!" and then advises staff on how to delete messages, presumably so that the boss can't see them.

In an annual report, another union officer from the Staff Services Association writes about the MEA's health insurance administrator, "This is not the MESSA of 20 years ago. This is a 'leaner, meaner MESSA' in survival mode." That officer then goes on to describe MESSA's attempts to limit the use of sick time, particularly the "issues" that this union has with MESSA's human resources department over the use of the Family Medical Leave Act: "In their effort to determine if sick leave qualifies as FMLA, HR asks for more clinical details than they need, and sends threatening letters to members in order to get this information."

One might think that the MEA is being hypocritical in the way it treats its employees, given the way the union politicizes contract negotiations, fights cost-saving measures and pressures districts about health insurance claims, but that isn't necessarily the case.

It's more likely that they are being consistent to their own worldview, one in which the workplace is inevitably the scene of struggle between workers and management, and in which the only way to resolve conflict is through the constant haggling of collective bargaining and the filing of grievances. For a union to take "unbelievably anti-union positions" is not all that remarkable according to how they see things. That's what employers do, even if the employer is a union itself. (It's worth noting that at no point in any of the USO's reports do their officers say, "Hey, this is a union that's doing this to us!")

The notion of workers and management working together toward common goals, in mutual respect and good faith with a minimum of threats and acrimony is, apparently, incomprehensible within the walls of MEA headquarters.

Which may go a long way towards explaining the state of our public schools in Michigan. The MEA, in the final analysis, is not here to assist the schools in their mission of educating children. The union's goal is to secure from school districts the best compensation packages and work rules for its members, just as the USO is attempting to do. Cooperation, even if it's possible, isn't really what the MEA is about. Its modus operandi is the constant maneuvering for advantage in the workplace. The public schools are at the center of an eternal struggle, and our children are caught in the middle.