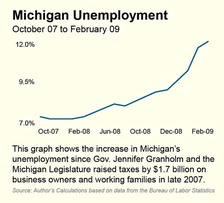 Recall 2007? The Michigan Legislature had appropriated more spending than tax revenues could accommodate, and it wanted to do the same in 2008. Legislators dithered all year in denial and in a GM-like failure to undertake transformational reforms. In a sloppy finish, they imposed $1.4 billion in business and personal income tax increases, notwithstanding what was then "just" a one-state recession.

Well, 2009 could be a repeat, perhaps ending in a revision of the Michigan Constitution to permit a graduated personal income tax. State revenues are running $1 billion lower on an annual basis than projected
just three months ago, and unless lawmakers immediately begin to seriously restructure and cut programs, they'll be too late to close the gap with smarter spending.

Without reform, Michigan will have another budget train wreck leading to tax hikes.

Of course, unlike 2007, some $2.9 billion in federal "stimulus" money
is flowing into state government through 2011. While some of these federal funds can fill budget gaps opened by revenue declines, others can be spent only on supplemental "over-and-above" programs and projects.

In her 2009 State of the State address, Gov. Jennifer Granholm implied that the state wouldn't use "stimulus" money to avoid needed reforms: "One-time money will not weaken our long-term resolve to keep our fiscal house in order." Unfortunately, that was before state tax collections fell off a cliff.

At the same time, the Legislature still refuses to prioritize, streamline and privatize state government to a level supportable by a private-sector economy that has lost, according to the Senate Fiscal Agency, 737,400 payroll jobs since 2000. Indeed, so far they've refused even the modest reforms recommended in the 2009-2010 executive budget.

For example, the governor proposed eliminating state arts grants,
but the Republican-controlled Senate voted to restore half the money.
The governor wants to cut funding in half for the MSU agricultural experiment station and extension service, but the Democrat-controlled House used "stimulus" money to raise current spending by $3.5 million. The House also passed a costly bill making post-retirement health benefits
a contractual right of state and local government retirees.

The fact is, Michigan just has more government than we can afford. We lock
up too many non-violent prisoners and refuse to economize by placing at least some of them in privatized prisons. Money is poured into state universities that have no commitment to cost containment and no hesitation about sticking students with tuition hikes that far exceed the rate of inflation. Too often, the interests of politically powerful government and school employees are placed ahead of taxpayers.

Without reform, Michigan will have another budget train wreck leading to tax hikes. "Obama-bucks" may postpone the reckoning, but given how the bottom has fallen out of state tax collections, that's not guaranteed. If the crash does happen in 2009, the betting favors an attempt to impose a graduated income tax, with the Legislature perhaps voting to place the measure on the ballot during a low-turnout election in the depths of February.

After the 2007 tax increase, Gov. Granholm said, "I'm not ever going to raise taxes again," yet this year she recommended hiking taxes by $100 million, partly from a repeal of automatic indexing of the personal exemption in the state income tax. In a recent news report, the governor also said that she has "long supported" a graduated state income tax and is "open" to discussing one in order to replace the 2007 business tax increase. If a year-end budget gap looms, that tax replacement could easily become a tax hike.

This much is certain, however: Michigan cannot support more taxes or Lansing's business-as-usual practices. Legislators must begin now to cut and restructure state programs. Otherwise, they virtually guarantee a repeat of 2007, and a bleaker future for Michigan.

Jack McHugh is senior legislative analyst at the Mackinac Center for Public Policy, a research and educational institute headquartered in Midland, Mich. Permission to reprint is hereby granted, provided that the author and the Center are properly cited.

(Note: This is an edited version of a commentary that originally appeared in the Detroit Free Press April 15, 2009.)