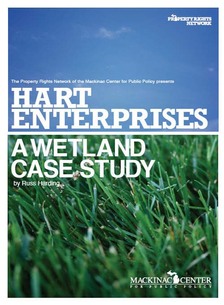 “Hart Enterprises: A Wetland Case Study” details the problems associated with Michigan’s wetland statute and the negative effects it has on property owners. It can be read at www.mackinac.org/9504.

Gov. Jennifer Granholm made the right policy call in announcing her decision to return wetland permitting to the federal government. The announcement was met with heavy applause as she delivered her State of the State address, but since that time there has been much criticism of the proposal from environmental groups and from members of both parties in the Legislature, including Sen. Patty Birkholz, R-Saugatuck Township, chair of the Senate Natural Resource and Environment Committee. Opponents claim that wetlands in the state will go unprotected, but estimates of potentially unprotected wetland acreage are unreliable as the state's wetland inventory is not accurate.

The lack of regulatory certainty in Michigan is chasing jobs to other states.

Michigan was the first state to take control of federal wetland permitting when it assumed the program in 1984 -New Jersey is the only other state that operates the federal program within its borders. The rationale for taking over the program was sound but much has changed since 1984. The expected benefits from operating the federal program never materialized:

It is curious that state environmental groups are now lobbying to keep the state in the business of issuing federal wetland permits. The Michigan Environmental Council in 1997 petitioned the EPA to take the wetland delegation back from the state, claiming the Corps would do a better job.

The $2 million that could be saved by returning the program is helpful, but
the largest benefit is regulatory certainty for job providers in Michigan. Returning the program to the federal level will ensure wetland permit applicants will be subject to the same set of rules as the rest of the nation. The definition of wetlands used by the Corps is easier to understand than state law and provides more certainty for developers who are used to complying with federal requirements in the other states.

Currently in Michigan an area is a wetland if the DEQ considers it to be a wetland. The lack of regulatory certainty in Michigan is chasing jobs to other states. Hardly a week goes by when I do not receive a call from a frustrated landowner, farmer or business owner who has given up on investing in Michigan due to the state's overzealous regulation of wetlands. Relying on the Corps for wetland permitting is not a panacea, but it is a step in the right direction.

Russ Harding is director of the Property Rights Network at the Mackinac Center for Public Policy, a research and educational institute headquartered in Midland, Mich. Permission to reprint in whole or in part is hereby granted, provided that the author and the Center are properly cited.