Dragging ‘Em Down to Our Level 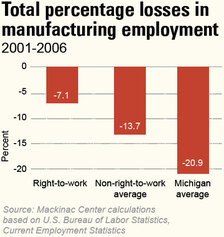 It has been suggested more than once lately that Michigan's problems would be less severe if other states had the sort of strong unions we have here. This is nothing more than wishful thinking that impedes real solutions. We cannot, and should not, expect other states — especially those not as hard hit by current economic conditions — to embrace unions at the expense of productivity and competitiveness.

Last December Jonathan Cutler, a professor at Wesleyan University in Connecticut, opined in The Detroit News that "[i]f there is hope long term — for the unionized Big Three companies and for the UAW — it rests in dealing with the unfinished business of the 1980s: unionizing the unorganized transplants."

Economic conditions are not uniformly bad and opportunities still exist in many states, and in many industries and sectors.

To that end, the Employee Free Choice Act before Congress would effectively remove secret-ballot elections as a means of establishing a union in a workplace. Instead, unions would be established when they can secure signatures from a majority of workers, a process known as card-check. In the Jan. 26 Detroit Free Press, Gary Chiasson, professor of industrial relations at Clark University in Massachusetts, speculated that if the Employee Free Choice Act were passed, unions would focus on low-unionization states such as South Carolina, Alabama and Texas, making those states less attractive. Chiasson concludes that "it is in Michigan's interest that Alabama become more unionized."

Neither professor can bring himself to say it directly, but it's hard to avoid the implication that they both see unions as a drag on the state's economy. Their solution is straightforward: drag everyone else down to our level.

Last November, EFCA's passage was widely considered inevitable as part of the incoming Obama administration's early legislative push. But then the heavily unionized automotive industry in Detroit reached a critical point, requiring a federal government bailout to avoid bankruptcy. At the same time UAW leaders balked at further concessions, providing a very public example of union stubbornness and irresponsibility. Not surprisingly, opposition to EFCA grew and the bill's progress through Congress was delayed.

This is good news for Michigan. Contrary to Chiasson, passage of EFCA would probably strengthen unions in Michigan more than in other states, increasing the burden that they impose on the state's economy.

There are two reasons for this: first of all, EFCA is bound to lead to the establishment of unions in workplaces where union support is weaker. Weaker union support in the workplace means more union opponents, who — given the choice — would probably opt out of joining the union and paying union dues, an option that is available in states with right-to-work laws but not in Michigan. For unions, there will be a strong incentive to focus on states like Michigan where they can be assured of receiving dues from all workers, even if support in the workplace is weak.

Second, because the card-check process is vulnerable to abuse, unions will be tempted to resort to intimidation to secure signed authorization cards. Intimidation is both easier to engage in and more tempting when one has the advantage of numbers. Intimidation tactics are also harder to resist when one cannot be sure that the powers that be will protect you. Michigan, with its sizeable number of labor officials and politically entrenched unions, is prime territory for rough recruiting methods. In short, the legislation that some hope will reverse our decline is likely to have the opposite effect, assuming it passes at all.

Michigan would be far better off dealing with its own problems. Rather than expecting workers in other states to shoulder our self-imposed burdens, we should work to establish a healthy balance in labor relations, one in which unions are lean, accountable and focused on their members. Passing a right-to-work law would put Michigan in the company of states that have been adding jobs for decades and make unions accountable to the men and women they represent. Just as important, it would represent Michigan residents taking charge of the policies that are key to revitalizing our state.