Where Is the Brownfield? (Viewpoint on Public Issues) 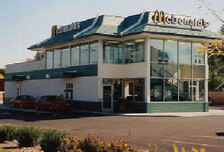 The city of East Lansing is attempting to classify this McDonald’s restaurant as a brownfield site in order to redevelop privately owned property.

Joe Maguire, president of Wolverine Development and a Mackinac Center board member, was dumbfounded when he received a letter last December from an environmental consulting firm requesting his consent for access to conduct an environmental assessment on property he owns in East Lansing. Maguire's well-maintained property features a McDonald's restaurant in the East Village area adjacent to the Michigan State University campus.

Maguire was not aware of any environmental pollution on his property and certainly had not requested an assessment. After some research, he quickly discovered this was not an administrative blunder but rather an attempt by East Lansing officials to reclassify his property a brownfield site.

Using the brownfield program as a tool to justify taking private property is a serious misuse of what was intended to spur economic development and environmental cleanup.

A brownfield is property that is abandoned or underutilized due to environmental contamination. Frequently, the parties responsible for the contamination are no longer around or have gone out of business.

Environmental cleanups are often expensive and generally require several years to complete. While serving as deputy director of the Department of Natural Resources in the early 1990s, I worked with municipalities to modify state cleanup laws in order to encourage the reuse of brownfield sites. The Legislature overwhelmingly adopted changes to Michigan law that included revising legal liability standards and adopting more realistic health-based cleanup standards. As a result, Michigan was the first state to replace the federal standard of strict liability with a causation standard.

Under the old law, a party that purchased a brownfield site could be forced to pay to clean up the property even though they did not cause the contamination. A property owner was deemed guilty by just being in the chain of title — a serious impediment to attracting the necessary capital to develop brownfield sites.

The new law's causation standard — if you caused the contamination you pay to clean it up and, conversely, if you didn't cause the pollution you don't pay — opened up a floodgate of investment into brownfield sites.

But is the city of East Lansing truly concerned that the properties belonging to Maguire and other East Village business owners are environmentally contaminated? Or could there be another motive? A look at the city's own words is revealing.

The city applied for and received a grant from the U.S. Environmental Protection Agency to inventory and conduct environmental assessments on so-called brownfield sites in the East Village. In the grant application, the city states: "One of the more significant challenges for the City of East Lansing is the lack of property tax revenue from the over 5,200 acres of MSU land within its boundaries." The application goes on to state: "The city has designated East Village as a redevelopment area and through its extensive public planning process had developed a vision of a mixed-use commercial and residential neighborhood that includes not just students, but residents of all ages and lifestyles.... East Village is an area that cannot be redeveloped without extensive environmental investigation...."

In other words, in an effort to generate more tax revenue, the city is hoping to remove existing businesses using a brownfield designation and replace them with new commercial development.

It is clear from a reading of the grant application that city officials believe everything would be better if MSU were not located in East Lansing, ignoring the fact that students who live there support the many taxpaying businesses in the East Village area. One can speculate that were it not for MSU's presence in East Lansing, the city might not even exist. There are probably several cities in Michigan facing declining revenues that would love to have a major state university within their boundaries.

Russ Harding, former director of the Michigan Department of Environmental Quality, is the director of the Property Rights Network at the Mackinac Center for Public Policy, a research and educational institute headquartered in Midland, Mich. Permission to reprint in whole or in part is hereby granted, provided that the author and the Center are properly cited.