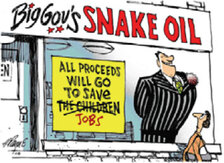 A Sept. 26, 2008, Capitol News Service article with the headline "Tax breaks, code updates pushed to promote energy efficiency," described yet another set of special tax credits being sought in Michigan, and also offered a textbook example of what economists call "rent seeking."

Rent seeking is another way of saying favor seeking, and is done by firms or industries that turn to government for special privileges in the hope of collecting higher than normal returns, or "rent," than they would otherwise earn in an unfettered marketplace.

One solution to the problem is to have less government for special interests to lobby.

Both the privilege seekers and granters almost always pretend to be altruistically looking out for the interests of others. In that article the CEO of the Michigan Association of Home Builders said, "We aren't looking for a handout ... What we are saying is give Michigan homeowners and consumers a break. Give them an incentive and a reason to invest in and improve their homes."

Of course, if the building industry just wants to "give consumers a break," why don't they lobby for across-the-board tax relief? Instead, they would force taxpayers to jump through a construction hoop in the hope of getting a bit of tax relief.

Those who seek (and grant) the special tax favors also proclaim that they create gobs of jobs. However, targeted tax credit programs, like the Michigan Economic Growth Authority, don't have a very good track record on that count. Besides, the logic is confused: If tax relief creates jobs in one industry, why limit it rather than granting it to all?

More fundamentally, these discriminatory tax breaks chip away at the rule of law by replacing uniform rules and regulations with a patchwork of special favors for which taxpayers must come before legislators and bureaucrats to beg; they establish the rule of men not laws. Unlike across-the-board tax cuts, discriminatory ones increase government's reach by placing this extraordinary power of discretion into the hands of current officials who frequently protect their coveted jobs at the expense of others.

The resulting toxic economic and political atmosphere probably explains why a high incidence of rent seeking — and granting — is itself a jobs killer. Economist Harold Brumm studied the effects of rent seeking from 1985 to 1994 in the 48 contiguous states. His research shows an empirical link between the degree of rent-seeking in a state, its tax burden and its economic growth rate, adjusted for inflation. He writes:

"The conclusion reached here is that rent-seeking activity has a relatively large negative effect on the rate of state economic growth. An implication of this finding is that a state government which promulgates policies that foster sustained artificial rent-seeking does so at considerable expense to its economic growth."

A classic rent-seeking example right here in Michigan involves the former director of international and national business development for the Michigan Jobs Commission (predecessor agency of the Michigan Economic Development Corporation). After leaving the state, this former bureaucrat was hired by Ernst & Young to steer its clients through the process of obtaining economic development incentives. State records show that at half of Michigan Economic Growth Authority meetings held in 1999 and 2003, this individual represented Ernst & Young clients seeking tax favors.

Now imagine this scenario being played out a thousand times by consultants across the country and you begin to get an idea of why it's so difficult to make government smaller, despite the frequently expressed wishes of the electorate to do so.

One solution to the problem is to have less government for special interests to lobby. The state of Michigan should begin 2009 by eliminating departments and programs with a rich history of failure at their stated purpose of growing the economy, such as the Michigan Economic Development Corporation and the Michigan Economic Growth Authority.

Michael D. LaFaive is director of fiscal policy and Jack McHugh is senior legislative analyst at the Mackinac Center for Public Policy, a research and educational institute headquartered in Midland, Mich. Permission to reprint in whole or in part is hereby granted, provided that the authors and the Center are properly cited.