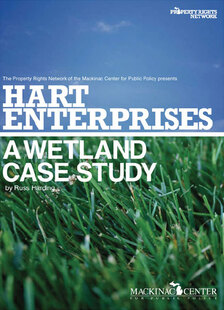 Gov. Jennifer Granholm promised to "go anywhere and do anything to bring jobs to this state." To that end she's made a number of overseas trips to entice corporate executives into outsourcing jobs and operations here and dramatically expanded the state's economic development apparatus. Unfortunately, not only will these central planning programs fail to save Michigan's sinking economy, other administration policies are driving the state deeper into an economic abyss.

Instead of schmoozing with captains of industry in Japan and Germany, Gov. Granholm should have visited Sparta, Mich., where more than 100 jobs may soon be driven out of the state by her own Department of Environmental Quality's misguided prosecution of a local entrepreneur over a seasonal mud puddle in an industrial park.

The fact that MEDC officials do not speak out about the DEQ’s job-killing policies reveals what may be the agency’s true purpose.

Hart Enterprises is a fast-growing manufacturer of medical devices. In the 1980s, founder and CEO Alan Taylor moved the business and its five employees to Michigan. He's grown the firm to more than 100 well-paid workers and wants to add more.

To that end, in 2006 Hart Enterprises began a parking lot expansion on a one-acre portion of the firm's property. Well into the project, Taylor was surprised to receive a letter ordering him to stop this "unauthorized activity" on "regulated wetlands" and to apply for a permit.

The frustrating regulatory quagmire that Taylor found himself in has been documented by the Mackinac Center and is familiar to countless businesses all over Michigan. The Center's Property Rights Network receives calls regularly from frustrated business and landowners who are unable to use their property due to DEQ permitting obstacles.

Denial of a required environmental permit means no business, no jobs and no hope for Michigan's failing economy and struggling workforce. It's the equivalent of a 100 percent business tax rate and it may soon force Hart Enterprises out of a state that the owner has concluded is openly hostile to his business.

To make matters worse, the DEQ's "wetlands" mischief is only the tip of Michigan's regulatory iceberg. Gov. Granholm and the DEQ have ordered — without legislative authorization — that power plants reduce mercury emissions by more than 90 percent, far more stringent than federal standards. This will further increase electricity rates that are already uncompetitive with other states.

A recently enacted law that prohibits electricity competition in the state and restores the monopolies of incumbent utilities will exacerbate this problem. Yet another new law championed by Gov. Granholm and the DEQ imposes a groundwater use regulatory and permitting regime that will transform what had been a comparative advantage for the state — abundant groundwater — into just another reason for potential job providers to say "No!" to Michigan.

Ironically, while one department makes it unnecessarily difficult to create jobs in Michigan, another claims to be doing the opposite, albeit in a completely misguided and ineffective manner. The Michigan Economic Development Corporation presides over a myriad of selective tax credits, abatements, direct subsidies and other goodies that it doles out to corporations and industries it deems "winners." Even if the MEDC was a jobs creating powerhouse (since its creation in 1999, Michigan's per-capita Gross Domestic Product rank among the states has fallen from 16th to 41st, and the state has lost 323,000 jobs), it's a travesty for the DEQ to unnecessarily kill the types of jobs that the MEDC spent millions of dollars trying to create.

The fact that MEDC officials do not speak out about the DEQ's job-killing policies reveals what may be the agency's true purpose: providing cover to politicians who need to look like they're doing something about our failing economy, but are unwilling to enact genuine improvements that challenge powerful special interests, including government employee unions and anti-development environmental groups.

Were it truly an economic development agency, the MEDC would also champion reforms like right-to-work legislation and the repeal of a punitive gross receipts business tax, including a 22 percent surcharge imposed in 2007 to allow the Legislature and governor to avoid necessary but politically challenging transformational government reforms and restructuring.

While the governor and the MEDC are employing failed methods and taxpayer dollars to attract high-tech, growing firms like Hart Enterprises, the DEQ is driving them off. Until the state rejects this nonsensical and self-destructive behavior, Michigan will continue to see businesses, jobs and residents flee the state.

Michael D. LaFaive is director of the Morey Fiscal Policy Initiative and Russ Harding is director of the Property Rights Network at the Mackinac Center for Public Policy, a research and educational institute headquartered in Midland, Mich. Permission to reprint in whole or in part is hereby granted, provided that the authors and the Center are properly cited.