Will We Move Forward or Backward on Union Transparency? 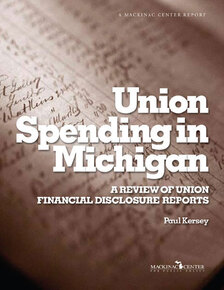 In a move that deserved more attention than it received, the Department of Labor recently released its final rules for financial disclosure by union-controlled trusts. Secretary of Labor Elaine Chao and her staff deserve congratulations for completing the first round of reforms to make unions more transparent and accountable to the men and women they represent. While much work remains to be done in this area, Chao has moved into a long-neglected area and laid a solid foundation. What remains to be seen is what the next administration will do with this legacy: will they build on it or tear it down?

But the entire union transparency initiative could be undone by an incoming administration that is overly influenced by union officials, and that would be regrettable.

The new T-1 form will apply to trusts when a majority of its funds are contributed by unions, or a majority of its governing board is appointed by one or more union groups. Union trusts exist for a wide range of purposes, from training to health care, but until now there was no financial report requirement for a wide range of union trusts, leaving union members largely in the dark as to how these trusts functioned.

Along with the LM-2 form, which covers basic union operations, and the LM-20 form, which covers transactions where a union official has a potential conflict of interest (such as purchasing services from a company owned by a relative) the T-1 form completes the circle of union disclosure, giving members a reasonably complete picture of their union's financial dealings.

The picture that has emerged so far is troubling in many respects. A recent Mackinac Center study of union spending, based on LM-2 forms filed by Michigan unions, indicated that most unions spent less than half of their budgets on representation. Representation made up less than a third of spending by the Michigan Education Association. Overhead and administrative costs were notably high for all unions, especially when compared to the standards of other non-profits - and that in spite of the fact that unions in Michigan are relieved of the burden of persuading donors to give funds voluntarily.

Further complicating matters, many union expenditures were highly questionable: one UAW local in Dearborn spent $10,000 on softball diamond rentals and another $30,000 on athletic uniforms and treated these as representation. Many unions — not all but many — made payments to political groups that they then tried to pass off as charitable contributions or representation expenses.

It will be a while before we know what the T-1 rules will show us; the new requirements take effect on Jan. 1, 2009, and the first filings won't come in until a year after that. But we know what workers should rightfully expect to see: trust operations that are focused on their core mission of improving working conditions for union members, with reasonable administrative costs and a minimum of political activism or frivolous spending, if at all.

The next administration has an important decision to make regarding the implementation and enforcement of union disclosure rules. There is considerable room for improvement in all of the existing forms: we recommend lower thresholds for listing individual expenditures. Under the current rules unions are not required to itemize expenditures of less than $5,000 on the LM-2, and that amount is even higher — $10,000 — in the case of trusts that file the T-1. This means a lot of significant transactions are still kept out of sight.

But the entire union transparency initiative could be undone by an incoming administration that is overly influenced by union officials, and that would be regrettable. The typical union member pays several hundred dollars per year in compulsory union dues. Most union members are obligated to pay dues as a condition of their jobs. The larger union organizations have budgets of hundreds of millions of dollars. Workers throughout the country, and especially in Michigan, expect their unions to look out for them in the workplace. They deserve to know that their union representatives are doing their jobs.

Union financial disclosure is something that had been neglected for decades in Washington. Michigan's working men and women all have a stake in union transparency going forward rather than backwards.

Paul Kersey is labor policy director at the Mackinac Center for Public Policy, a research and educational institute headquartered in Midland, Mich. Permission to reprint in whole or in part is hereby granted, provided that the author and the Center are properly cited.