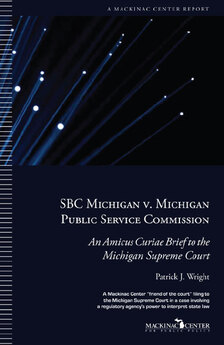 In his amicus brief, Center Senior Legal Analyst Patrick J. Wright argued that the power of the bureaucratic state should be limited by checks from the other branches of government. The Michigan Supreme Court agreed.

In early September, Gov. Jennifer Granholm threatened that if she failed to obtain her goal of mandating a 10 percent renewable energy portfolio through legislation, she would then seek to impose it via administrative regulation. This threat highlights the importance of an underreported Michigan Supreme Court case, In re Complaint of Rovas Against SBC Michigan, which significantly limits the powers of Michigan's current governor and future governors to unilaterally impose their policy preferences and avoid the checks and balances that are at the foundation of Michigan's government. At issue in this case was a mundane technical issue in which a customer filed a complaint against SBC with the Michigan Public Service Commission. The court ultimately decided that the MPSC overstepped its powers in taking action against SBC.

Michigan is on its fourth constitution, and all four have explicitly declared that the powers of the three branches of government are to be separate. This is no surprise since the concept is so integral to America's founding. The Founding Fathers largely accepted the views of Montesquieu, who argued that separation of governmental powers was needed to prevent tyranny.

In Federalist #51, the concept was discussed:

But the great security against a gradual concentration of the several powers in the same department, consists in giving to those who administer each department the necessary constitutional means and personal motives to resist encroachments of the others. . . . Ambition must be made to counteract ambition. . . . If men were angels, no government would be necessary. If angels were to govern men, neither external nor internal controls on government would be necessary. In framing a government which is to be administered by men over men, the great difficulty lies in this: you must first enable the government to control the governed; and in the next place oblige it to control itself.

One of the pillars of the separation of powers is that all legislative power is supposed to vest in Congress. Yet, in the last century, a great challenge to the separation of powers has been the rise of the administrative state; federal bureaucracies are often given vague directions by Congress. The agencies are then allowed to make rules, prosecute violations of those rules and often act as the arbiter of whether those rules have been breached.

The U.S. Supreme Court has allowed vast portions of the legislative power to be transferred to administrative agencies. For instance, the court approved a statute that allowed the Occupational Safety and Health Administration to set standards so that "no employee will suffer any impairment of health" and during war time allowed an agency to fix prices at a "generally fair and equitable level." And the court has allowed numerous statutes authorizing regulation in the "public interest."

Having allowed these vast delegations of legislative power, the federal courts were faced with a choice - they could defer to agency decisions about the best course of action or the courts could vigorously review them. Believing that federal agencies had more democratic controls than the courts, the judiciary decided it would defer to the agency action.

The consequences of this choice were profound. Now unelected and largely unaccountable federal bureaucrats, without any real check from the courts, would have power to interpret the vague mandates from Congress. Not surprisingly, the agencies often did so in a manner that expanded their power and myopically focused on the agencies' subject matter, while downplaying the impact of their decisions on the general public.

With its Rovas decision, the Michigan Supreme Court has determined that Michigan's constitutional requirements differ from the federal one. First the court referenced another case stating delegation is only proper where the Legislature has provided "standards or principles." Thus the Michigan Legislature should not be able to give vague mandates to administrative agencies. Second, the court held that the Michigan Constitution requires more fidelity to the concept of separation of powers. In Michigan, interpreting the law is primarily a judicial function, not an executive function. The Michigan Supreme Court expressly rejected the federal model.

In practice, this ruling will make it more difficult to achieve policy change through executive fiat because the courts will engage in a meaningful review to determine whether the agency's action was permitted by the Legislature's statute. Thus all three branches have a role. While there may be times when citizens wish the system of checks and balances could be suspended for some "worthwhile" result, we are all freer when the separation of powers encourage the government to control itself.

Patrick J. Wright is senior legal analyst for the Mackinac Center for Public Policy, a research and educational institute headquartered in Midland, Mich. Permission to reprint in whole or in part is hereby granted, provided that the author and the Center are properly cited.