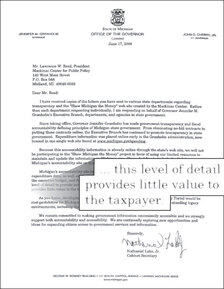 This is a copy of the first letter from the Office of Gov. Jennifer Granholm rejecting the Center’s request to post a detailed report of the state’s expenditures online.

Thomas Jefferson envisioned that the finances of government should be "as clear and intelligible as a merchant's books," allowing "any man of any mind" to "comprehend them, to investigate abuses and consequently to control them."

However, while the Information Age places such transparency within our grasp, a detailed expense report for Michigan government will not soon appear on the Internet for public inspection. With one exception: Last spring, Michigan Secretary of State Terri Lynn Land began placing a quarterly report of the Department of State's expenses online. Despite this example to guide them, the Office of the Governor has twice refused requests to replicate this report for other departments of state government, dismissing the idea as "cost prohibitive." The governor's office also deemed the information contained in such a report amounts to a level of detail that would be of "little value to the taxpayer."

The decision to “show Michigan the money” — or not — is a matter of priorities, not resources.

Requests to the Office of the Governor were made by the Mackinac Center for Public Policy's "Show Michigan the Money" transparency project. An identical and earlier request from the Center is what inspired Land to begin posting her department's reports. In addition, the MDOS has provided a cost estimate for the project.

For staff to initially create the first online expense report cost $2,400. The "going forward" price to continue posting this report each quarter is just $700; or $2,800 annually. The MDOS also notes that these costs have been and will be entirely absorbed by assigning the task as a job priority for existing employees. No additional staffing costs were or will be necessary.

The governor's office appears to be misunderstanding the modest nature of this request for information. Bearing in mind that the annual budget for all of state government is nearly $43 billion, it would appear that the comparative price to implement an MDOS-equivalent report for all departments would be far short of "prohibitive."

The fiscal 2008 budget for the MDOS was about $208 million, so figuring out how to produce that first report cost the department 0.0012 percent of its total budget. Now that they know how to do it, the cost for each subsequent quarterly report is just 0.00035 percent of the annual budget. Roughly applying these ratios to the entire $43 billion state budget would mean that the total cost of creating the first reports of this kind for every department would be $516,000. Thereafter, the total cost of quarterly reports for every department would be just $129,000 - or $602,000 annually to keep this whole transparency project running.

These numbers are figuratively "pennies in the seat cushions" of the state budget. For example, one relatively new government program, the "21st Century Jobs Fund," cost taxpayers $65 million in 2008; and a brand new program designed to lure movie producers into Michigan carries an estimated 2009 price tag of $117 million. It would take less than one week of spending from just one of these new programs to start up and fully fund an online expense report project for every state department. The decision to "show Michigan the money" - or not - is a matter of priorities, not resources.

This ballpark figure will surely vary depending upon the specific details of each department's spending. But economies of scale could also drive down the estimate significantly: The Michigan Department of Information Technology should theoretically find it easier to replicate the procedure for each department now that MDOS has shown the way.

The MDOS has taken a modest but firm step in the right direction, placing online the names of vendors getting paid by the department, the reason for the expenditure and the amount. The report has its limitations and falls short of the "gold standard" of transparency set by Missouri (a state Web site which, among other things, is updated daily and also provides the salary information for every state employee). While the Office of the Governor has stated that replicating Missouri would cost $100 million or more, they have yet to justify why replication of what the MDOS has already accomplished is beyond Michigan's reach.

A government that is spending money on everything from 20th Century Fox to 21st Century Jobs shouldn't have a 19th century standard for showing the taxpayers where it's all going.

Kenneth M. Braun is a policy analyst specializing in fiscal and budgetary issues at the Mackinac Center for Public Policy, a research and educational institute headquartered in Midland, Mich. Permission to reprint in whole or in part is hereby granted, provided that the author and the Center are properly cited.