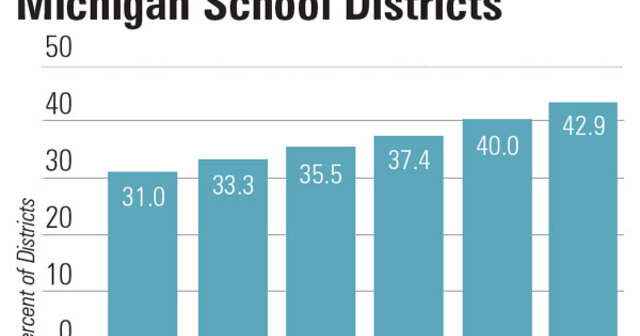 The number of Michigan school districts turning to privatization as a way of saving money continues to grow, according to the Mackinac Center for Public Policy’s sixth privatization survey of the state’s 552 conventional public school districts. The survey found that the percentage of districts contracting for the management or operation of at least one of the "big three" support services — food, janitorial or busing — increased for the fifth survey in a row to 42.2 percent, up from 40.2 percent in 2007. That is a rate increase of almost 5 percent.

Done right, school support service privatization can save money and improve services — even if the privatization option is used solely to persuade public employee bargaining units to sharpen their pencils.

According to this year’s survey respondents:

We received a great deal of feedback from literally hundreds of superintendents and business managers, dozens of whom volunteered that the mere discussion of privatization allowed them to wrest significant cost-saving concessions from different bargaining units. Some districts, on the other hand, said they were too small to privatize because they could not attract vendors. But we have seen privatization take place in districts that have only 14 students. It is possible.

No single story from this year’s survey stands out like that of the Southfield Public Schools. Since our last survey, Southfield has privatized food, janitorial and busing services and estimates three-year savings of between $14.7 million and $21.5 million. Dividing the 2008-2009 expected enrollment of 8,800 students in the district into expected savings, these figures translate into projected annual average savings of $557 to $814 per student per year. These are huge savings for any school district.

The district tried to avoid privatizing these large services, but its back was against the proverbial wall. Ken Siver, deputy superintendent, reports that the district attempted to obtain sufficient concessions to keep the work in house, but was rebuffed each time, leaving the district no choice but to privatize.

Despite the apparent usefulness of privatization to district officials — or perhaps because of it — the state Legislature is poised to meddle in the contracting affairs of schools statewide. House Bill 6342 would raise the hassle factor for district leadership by mandating that which is already in a district’s self-interest. The bill actually mandates cost-benefit analysis of the privatization alternative of both economic and non-economic costs. Districts already have an incentive to do the former, while the latter promises to muddy every privatization debate over potentially unquantifiable variables. Even when using strict economic factors, a district’s accountants can torture numbers until they tell you what you want to hear. One district that outsourced food services this year, for instance, made cost assumptions for future district cafeteria services that we believe strain the bounds of credulity.

This year’s survey includes 550 of the 552 conventional public school districts in Michigan. Despite aggressive attempts to get answers from Detroit Public Schools by phone this summer, and despite invoking the Freedom of Information Act, we were unable to find someone in the district willing to respond to the survey. This was also the case with DPS in 2006. We also chose to exclude the Upper Peninsula district of White Pine because, as in 2006, it has no students.

Done right, school support service privatization can save money and improve services — even if the privatization option is used solely to persuade public employee bargaining units to sharpen their pencils. This year’s survey findings indicate that contracting out not only remains a widely accepted practice, but one that will likely grow in the future.

Michael D. LaFaive is director of the Morey Fiscal Policy Initiative and William Freeland is a fiscal policy assistant at the Mackinac Center for Public Policy, a research and educational institute headquartered in Midland, Mich. Permission to reprint in whole or in part is hereby granted, provided that the authors and the Center are properly cited.