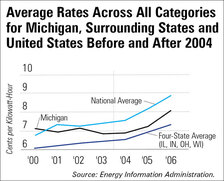 The Michigan Legislature is considering a package of bills designed to decrease the amount of competition in Michigan’s electricity markets and impose mandates for the use of certain "renewable energies," such as solar power. The bills are marketed as job creators that would help provide a reliable supply of energy, but in fact, the record shows they would raise the cost of electricity and deliver a painful blow to Michigan’s economy.

Michigan introduced competition in the supply of electricity in 2000 with Public Act 141. The act allowed consumers to purchase electricity through their existing electrical lines from suppliers competing with the state’s regional monopoly utilities (primarily DTE Energy and Consumers Energy). When the law was passed, Michigan electricity rates were among the highest in the country, and they were higher than rates in any of the neighboring states.

Given a state unemployment rate of more than 8.5 percent, Michigan cannot afford to abandon competition in electricity supply for the benefit of its two biggest utilities.

The majority of the benefits from competition occurred in the four years following the passage of P.A. 141. By 2004, Michigan’s electricity rates had fallen below the national average, where they remain today, and the gap between electricity rates in Michigan and surrounding states had narrowed. Michigan businesses and schools were saving millions of dollars in electricity costs by contracting with new suppliers at substantially lower rates than those charged by the former monopoly utilities. New generating capacity was also coming online, demonstrating that entrants were willing to invest in Michigan when the playing field is relatively level.

In late 2004, however, the Michigan Public Service Commission began requiring the customers of alternative suppliers to pay a surcharge to help the original utilities cover the "stranded" costs of meeting earlier state mandates. These surcharges were authorized by P.A. 141, but they undermined the act’s benefits. In the 12 months following the institution of the surcharge, industrial electricity rates jumped 13.2 percent, and the expansion of electricity competition effectively ended.

Hence, the Michigan Legislature should focus on eliminating these subsidies to the established big utilities, which benefited for decades from their state-granted monopoly status. Instead, the legislation being considered would guarantee the big utilities a 90 percent market share. The utilities claim they need such a guarantee on grounds that they need a predictable income in order to afford investments in new capacity.

But alternative suppliers in Michigan and throughout the country have managed to invest in new capacity while facing competition. Furthermore, the U.S. Federal Trade Commission has disputed the claim that regulatory protectionism is necessary for new investment. In an April 2008 regulatory filing, the FTC wrote, "We believe that a focus on removal of regulatory obstacles to efficient real-time price signals and demand response at the federal and state levels can be an important step toward appropriate, efficient reliance on conventional price mechanisms to handle scarcity and guide investment."

The House package of bills also contains a "renewable portfolio standard" requiring that a certain quota of Michigan electricity generation come from renewable energy sources. Since this requirement is included in a package that limits competition, the effect would be to largely foreclose anyone other than the big utilities from offering renewable energy in Michigan. The American Wind Energy Association, representing wind entrepreneurs who might possibly benefit from a renewable energy quota, urged legislators to reject the House bills because "the public should not expect economic benefits to result from the package."

Energy affordability and innovation are crucial to Michigan’s future. High energy costs hurt businesses and residents alike. Given a state unemployment rate of more than 8.5 percent, Michigan cannot afford to abandon competition in electricity supply for the benefit of its two biggest utilities. As noted by renowned economist Alfred E. Kahn, the father of airline deregulation under the Carter administration: "Policy makers confronting pressures to undo the restructuring of the electricity industry would be well advised to base their decisions on the longer-term benefits that will flow from properly implementing competitive markets."

Theodore Bolema, an attorney and faculty member at the Central Michigan University College of Business Administration, is an adjunct scholar of the Mackinac Center for Public Policy, a research and educational institute headquartered in Midland, Mich. Permission to reprint in whole or in part is hereby granted, provided that the author and the Center are properly cited. Bolema also is co-author of a recent policy brief about this issue titled "Proposals to Further Regulate Michigan’s Electricity Market: An Assessment."