My Union Dues Paid For That? 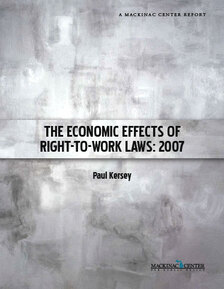 Published in 2007, Paul Kersey’s analysis of right-to-work laws has become a valuable resource for employees, employers, policymakers and the media.

Defenders of the status quo in Michigan, where workers may be forced to join or pay dues to a union as a term of employment, often presume that workers almost always benefit from union representation. They rarely offer supporting evidence of their assumption that union officials are models of unfailing competence and unimpeachable good faith. While many union officials are scrupulous and work hard to protect their members’ interests, there are union locals in Michigan where dues and trust have been squandered. A few examples:

Because unionized workers in Michigan generally cannot withhold their dues without putting their jobs at risk, those employees and their dues are particularly vulnerable to waste, fraud and abuse.

This wild goose chase, funded by IBEW member dues, ended with a nonunion contractor found liable for a trivial violation. It is quite likely that the union spent more than $10.56 pursuing Buist.

Across the state of Michigan thousands of workers pay millions of dollars in union dues annually. These funds are intended to ensure that workers get good representation in the workplace. But these funds can be wasted, sometimes on union political activism that workers may not support and sometimes on account of dishonest or incompetent union leadership. Because unionized workers in Michigan generally cannot withhold their dues without putting their jobs at risk, those employees and their dues are particularly vulnerable to waste, fraud and abuse. A Michigan right-to-work law would correct this flaw, make union officials more accountable to the men and women they represent, and make for more honest and capable union leadership.