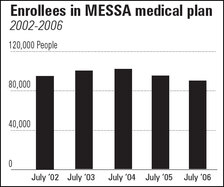 Source: MESSA 2006 annual report (Does not include dependents)

MESSA is closely linked to the Michigan Education Association, the labor union that represents teachers and other school employees. MESSA is not an insurance company. It’s a third-party administrator that sells insurance packages to school districts. Blue Cross Blue Shield of Michigan is the insurance carrier for all MESSA health plans except for the benefits that exceed BCBSM’s operating authority. The extraordinary benefits not covered by BCBSM are insured by BCS Life, a for-profit company partially owned by BCBSM.

The real answer to reducing the cost of health care for teachers and school employees is for school boards to utilize the advantages of competition.

MESSA reported $268.8 million in net assets to the Michigan Office of Financial and Insurance Services in its most recent financial report. MESSA calls this accumulated revenue "Net Assets Available for Benefits in Excess of Benefit Obligations." Sounds good! But it’s basically profit or "net gain" that comes from charging schools hefty fees for benefit plans.

MESSA’s accumulated assets of $268.8 million includes $150 million gained in just one year and excludes the $131 million of revenue gain that MESSA used to subsidize rates a few years ago. The $268.8 million is excess charges by MESSA to school districts. This represents more than $2,900 per employee covered by a MESSA health plan and the $150 million represents about $1,600 per covered employee. This is all taxpayer money — money that could have been used by school districts to enhance public school budgets and improve education for children.

There are alternatives to MESSA, given the recent legislation adopted by the Michigan Legislature as part of the budget wrangling this year. The new law will make it easier for schools to form insurance pools and ask for competitive bids for health plans. It also will require MESSA to release the aggregate claims history that it holds on each individual school district. Most insurance administrators would want to review that data before making a bid, but MESSA routinely refuses to release the numbers.

Beyond MESSA, the larger problem is that Blue Cross and Blue Shield of Michigan has a virtual monopoly on public school employee health care in Michigan, selling its plans directly to districts or through MESSA. BCBSM is governed by Michigan Public Act 350 as a "nonprofit health care corporation." The act exempts BCBSM from state taxes in return for requiring the corporation to insure anyone who can’t get coverage elsewhere.

BCBSM’s total annual premium from public schools is more than $2 billion, including $1.2 billion from MESSA. It makes a substantial financial gain on those premiums. Yes, BCBSM is a nonprofit corporation by law, but in many ways, it functions just as a for-profit company does. BCBSM is among the last of the state-controlled Blues plans; many Blues in other states have become mutual companies or stock companies. The same should occur with BCBSM, ending the corporation’s virtual monopoly and promoting competition and lower premiums.

The real answer to reducing the cost of health care for teachers and school employees is for school boards to utilize the advantages of competition. When health insurance administrators compete for business, costs come down. This does not mean that school employees will not have responsible coverage. It means that school boards will have the funds to advance education for children. The money is there. It just takes courage and determination by school boards and administrators to redirect the dollars.

Frank Webster is the former executive director of the Michigan Education Special Services Association and a health care adviser to the Mackinac Center for Public Policy, a research and educational institute headquartered in Midland, Mich. Permission to reprint in whole or in part is hereby granted, provided that the author and the Center are properly cited.