The Love of Power vs. the Power of Love 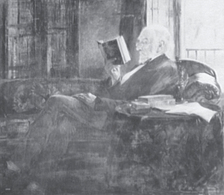 British Prime Minister William Gladstone recognized that love and power are often at odds with each other.
Source: Library of Congress, LC-D43-T01-50272 DLC

"We look forward to the time when the power of love will replace the love of power. Then will our world know the blessings of peace."

So declared British Prime Minister William Ewart Gladstone more than a century ago. His audience responded then the same way audiences would today — with nodding approval. But today’s world seethes with hypocrisy. Though we say we prefer love over power, the way we behave in the political corner of our lives testifies all too often to the contrary.

I resolve to learn more about the principles of love and liberty so that I can convincingly defend them against the encroachments of power.

Gladstone knew that love and power are two very different things, often at odds with each other. Love is about affection and respect; power is about control.

When real love is the motivator, people deal with each other peacefully. We use force only in self-defense. We respect each other’s rights and differences. Tolerance and cooperation govern our interactions.

Suppose we want to influence or change the behavior of another adult, or want to give him something we think he should have. This person has done us no harm and is in full command of his faculties. Love requires that we reason with him, entice him with an attractive offer or otherwise engage him on a totally voluntary basis. He is free to accept or reject our overtures. If we don’t get our way, we don’t hire somebody to use force against him. We "live and let live."

A mature, responsible adult neither seeks undue power over other adults nor wishes to see others subjected to anyone’s controlling schemes and fantasies. This is the rationale for limiting the force of government in our lives. In a free society, the power of love governs our behavior instead of the love of power.

But politics today provides a sad commentary on the ascendancy of the love of power over the power of love. We have granted command of 40 percent of our incomes to federal, state and local governments, compared to 6 or 7 percent a century ago. And more than a few Americans seem to think that 40 percent still isn’t enough.

We don’t trust the choices parents might make in a free educational marketplace, so we force those who prefer private options to pay twice — once in tuition for the alternatives they choose, and then again in taxes for a system they seek to escape.

Millions of Americans think government should impose an endless array of programs and expenses on their fellow citizens, from nationalized health plans to child day care to subsidized art and recreation. We’ve burdened our children and grandchildren, whom we claim to love, with trillions in national debt — all so that the leaders we elected and re-elected could spend more than we were willing to pay for. We claim to love our fellow citizens while we hand government ever more power over their lives, hopes and pocketbooks.

A tall order, to be sure. Let’s get started.