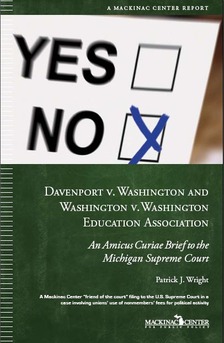 In November 2006, the Mackinac Center filed a “friend of the court” brief with the U.S. Supreme Court on two workers’ rights cases.

The U.S. Supreme Court’s end-of-session ruling that upheld a state’s ability to enact paycheck protection legislation was a clear victory for workers. The unanimous court properly rejected a Washington Supreme Court holding that unions have a First Amendment right to spend nonmembers’ money for political purposes. But paycheck protection provisions do not establish a proper equilibrium between unions and nonmember workers who disagree with the union’s politics. Only when state legislatures enact right-to-work laws will nonmembers in a union workplace enjoy full protection.

In order to prevent misuse of nonmembers’ money, right-to-work laws or an end to compulsory unionism is needed. Paycheck protection laws are better than nothing, but they certainly are not optimal public policy.

The court first discussed Washington’s agency-shop provision, saying it "entitles the union to levy a fee on employees who are not union members but who are nevertheless represented by the union for collective bargaining." The agency fee law allows the collection of a fee equal to full union dues. The general defense of agency fees is that they "prevent non-members from free-riding on the union’s efforts, sharing the employment benefits obtained by the union’s collective bargaining without sharing the costs incurred."

But full union dues cover more than collective bargaining. Nonmembers have long had a right to not have their money used for political purposes by the union. Unfortunately, to date, the Supreme Court allowed a union to overcharge, so long as there was a "Hudson" packet (named for the relevant court case), which requires the union to notify nonmembers of the process for a rebate.

The unions often make this process as cumbersome as possible. The individual amounts at issue are often small, but large when cumulated. Thus, by making the process of seeking a rebate difficult, the unions can obtain "free money" to use politically. Further, the union tells the nonmember how much is being used for political purposes. If the nonmember disagrees with that figure, he must go before an impartial decision maker and ultimately might need to file a lawsuit.

Paycheck protection laws only remove one of these hurdles. A union cannot obtain that portion of the agency fee that the union states is political without the members’ affirmative consent. But if the union underreports its political expenses, the nonmember would still have to challenge that figure.

It is not unreasonable to question whether nonmembers receive fair treatment from unions in their workplace. The cases discussed here arose when the WEA blatantly ignored the requirement to secure the affirmative consent of nonmembers before using their fees for political purposes. When the Evergreen Freedom Foundation filed a notice of violation, then-Attorney General Chris Gregoire, a Democrat, filed suit, which led to fines against the union totaling close to $600,000. The second case was a suit filed by nonmember teachers, who sought damages and who were eventually represented by the National Right to Work Legal Defense Fund.

Perhaps fearful of just such a ruling, the WEA began working on its friends in Washington state. An "emergency" bill was passed repealing the paycheck protection provision. The apparent emergency was that the bill needed to take effect before the Supreme Court issued its decision. The Democrat-controlled Legislature approved, as did Gov. Gregoire, who had filed the lawsuit against the WEA when she was attorney general.

The fact that the WEA and its Washington allies took these actions despite the express will of state voters and widespread national ridicule demonstrates how difficult it will be to have unions part with "free money." So, in order to prevent misuse of nonmembers’ money, right-to-work laws or an end to compulsory unionism is needed. Paycheck protection laws are better than nothing, but they certainly are not optimal public policy.

Patrick J. Wright is senior legal analyst at the Mackinac Center for Public Policy, a research and educational institute headquartered in Midland, Mich. Permission to reprint in whole or in part is hereby granted, provided that the author and the Center are properly cited.