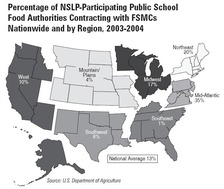 How to use school money effectively is a perennial question, and contracting school support services with a private vendor — a process known as "privatization" — has increasingly become an important answer. The reason is simple: Done right, privatization can save money and improve services. As described in the Mackinac Center for Public Policy’s newly published book "A School Privatization Primer for Michigan School Officials, Media and Residents," local budget challenges and key changes to state law have driven Michigan districts to focus on saving money for the classroom — something that the contracting of food, bus and custodial services can provide.

Survey data compiled by the Mackinac Center since 2001 suggest that Michigan school districts have increased their use of competitive contracting with private firms for school support services in recent years. From 2005 to 2006 alone, the percentage of districts that contracted food, busing or janitorial services rose from 35.5 percent to a revised 37.4 percent — a 5.3 percent single-year increase. The Center’s 2007 school privatization survey is not yet complete, but preliminary results suggest yet another significant hike in school competitive contracting statewide.

In the Great Lake State, food services have been the most popular school support function to privatize. In late 2006 and early 2007, the Mackinac Center surveyed all 50 states and determined that about 13.2 percent of conventional public school districts nationwide contract with a private firm to help manage or provide school food services. This is well below Michigan’s state-reported rate of 28.8 percent — the fourth highest in the nation — yet Michigan’s rate pales compared to Rhode Island at 86.1 percent and New Jersey at 64.4 percent. Clearly, even with food service contracting, Michigan school districts are not alone.

And consider school bus services. Robin Leeds, a school transportation industry consultant with more than 25 years of experience, says that in Connecticut and Massachusetts about 90 percent of students (public, private and parochial) ride to and from school on privately owned or managed buses. She told this author that the tradition of privately provided transportation evolved from a time when parents and schools paid farmers to take their children to school in horse-drawn carts and wagons. There remains much room for growth in the privatization of school transportation in Michigan; as of August 2006, a revised 22 Michigan school districts contracted with a private firm for busing services to some degree (excluding special education transportation).

All of this shows that competitive contracting for school services is not new. But privatization has gained momentum in Michigan — and will likely continue to do so — due to changes in Michigan law since 1994.

In light of these incentives, it’s important that school districts contract well. The Mackinac Center’s privatization primer describes 10 rules of thumb for contracting success. They include encouraging district officials to study the success or failure of other districts that have privatized — a visit to neighboring schools that employ vendors is a must. Districts also should work hard to ensure that plenty of contractors will want to vie for the service. Increased competition can lower the cost. And just as importantly, officials must be prepared to monitor deals after the contracts are signed to ensure that all the private contractor’s promises are being kept.

Done right, privatization remains an effective management tool for school districts across Michigan. Getting privatization right is vital because failure unnecessarily hurts the community and fails teachers and kids who need every available dollar to be spent in the classroom — not on buses, kitchens and lavatories.

Michael D. LaFaive is director of the Morey Fiscal Policy Initiative with the Mackinac Center for Public Policy, a research and educational institute headquartered in Midland, Mich. Permission to reprint in whole or in part is hereby granted, provided that the author and the Center are properly cited.