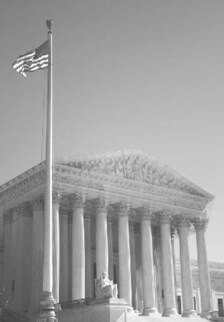 The U.S. Supreme Court ruled last month that the Environmental Protection Agency is obligated to regulate auto emissions of carbon dioxide to mitigate global warming. That the majority opinion is largely based on speculation about climate change rather than scientific fact is disquieting.

The issue before the court was whether the Clean Air Act authorizes the EPA to regulate carbon dioxide emissions and, if so, whether sufficient information of "endangerment" exists to compel the agency to do so.

Consensus is actually antithetical to the proper conduct of scientific inquiry.

In a 5-4 decision, the court held that "EPA’s steadfast refusal to regulate greenhouse gas emissions presents a risk of harm … that is both actual and imminent."

Hundreds, if not thousands of legal battles have been waged over the proper interpretation of regulatory statutes. Disagreements over the amount of deference due to a regulatory agency are legion. What sets this case apart is the court majority’s reliance on global warming rhetoric as the foundation of its ruling.

Contrary to the court’s conclusion, a "strong consensus" does not exist about a causal link between carbon dioxide and climate change; predictions of future warming; or, what effects may result from climate change.

What warming has occurred in the past century — about one degree Fahrenheit — is well within the range of natural variability. Predictions of more dramatic increases in temperature are merely conjecture, often the result of flawed theoretical modeling. In fact, global temperatures have fluctuated high and low during the past century in spite of a steady increase in carbon dioxide emissions.

Nor is there any credible evidence that climate change is responsible for "severe and irreversible changes to natural ecosystems," as the majority of justices inexplicably imagine. Ice caps aren’t melting and polar bears aren’t drowning into extinction. Sea levels are rising by about 2 mm per year, as has been the case for the past 100 years — and probably since the end of the "Little Ice Age" of the 1800s.

Claims of "consensus" about global warming first surfaced with the debut of the United Nation’s report on climate change in 1990. More than 2,000 scientists contributed to the final product. However, each author-scientist was responsible for only a few paragraphs related to their specialty within the mammoth document. There was no mechanism for all contributors to review the entire document or to ensure that reviewers’ recommended changes were incorporated into the final version.

Much more telling is the findings of scientists Dennis Bray and Hans von Storch, who surveyed more than 530 climate scientists from 27 countries in both 1996 and 2003. A majority of the respondents said the current state of knowledge is inadequate to reasonably predict climate variability over 100-year time periods, and more respondents "strongly disagree" than "strongly agree" that climate change is caused by human activity. Moreover, only 2 percent of those surveyed said they "strongly agree" that the theoretical models used to predict climate change are accurate.

Consensus is actually antithetical to the proper conduct of scientific inquiry. If anything, credible scientists continually try to disprove a theory to test its validity. Consensus is routine in politics, however. The art of the deal requires give and take.

The EPA and the Bush administration are partly to blame for the outcome of this case. Both the agency and the administration have characterized global warming as a real threat despite a lack of evidence, and the agency failed to challenge the environmental propaganda submitted as evidence in this case — including pronouncements that global warming caused Hurricane Katrina and that rising sea levels are "swallowing" Massachusetts.

In fact, climatologists Robert Balling and Randall Cerveny analyzed data from 1970 through 2003 and found no evidence supporting claims that global warming is intensifying hurricanes. And, current sea levels are lower today than at any time in the past 30 million years.

A "Friend of the Court" brief filed by prominent climate scientists unconvinced by Al Gore appears to have been ignored by the court.

The practical effect of this ruling will take years to materialize given the snail’s pace of the regulatory machine. But in lending credence to warmed over misinformation about climate change, a majority of the U.S. Supreme Court has ill-served the nation. As Thomas Jefferson noted: "If a nation expects to be ignorant and free, in a state of civilization, it expects what never was and never will be."