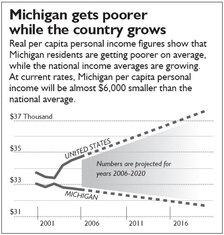 Source: Calculations based on data from the Bureau of Economic Analysis and Bureau of Statistical Analysis

Voices are telling Michigan residents once again that the state needs higher taxes to provide for increased spending on things like "cool cities" and higher education. To make their case, the high-tax proponents often cite cross-state comparisons that use static "snapshot" statistics and spurious associations. For example, one pro-tax organization has pointed to higher personal income in states with higher per capita tax burdens than Michigan’s and concluded, "High taxes don’t matter."

The 10 states with the lowest tax burdens are growing at an average rate of 2.6 percent — almost double Michigan’s growth rate and 34 percent faster than the national average.

Comparing states is always dicey because it’s hard to distinguish which variables are really important. It’s especially problematic when based on overly simplistic snapshot analyses. Looking at trends over time is much more revealing.

For example, of the 10 states with the fastest growing real per capita personal income from 2001 to 2005, only three had per capita tax burdens higher than the national average. What’s more, two of those three exceptions were Wyoming and Hawaii, which are typically excluded from state-by-state analyses because of unusual characteristics that make for unique economic situations. The third exception was Maryland, which has grown largely as the result of increased national defense spending following Sept. 11, 2001.

Nevertheless, proponents of higher taxes and higher spending argue that Michigan really doesn’t want to be like faster-growing, lower-tax states like Alabama, Tennessee, Montana or Iowa, because they all have lower per capita personal incomes. Herein lies the inadequacy of snapshot analysis. The main reason these states have lower incomes today is because they did so in the past — they have long been relatively poorer states. But fast growth means they won’t be poorer in the future.

If these recent growth rates continue, the average income in Alabama and Tennessee will be more than the Michigan average in just three years. Montana passes us in six years and Iowa probably will this year. Unless Michigan adopts policies that are more conducive to growth, which state looks like a better place to raise a family?

Similar trends are visible when one looks at real per capita state gross domestic product growth rates. Of the 10 fastest growing states, only one has a per capita tax burden higher than the national average. Looking at the flip side of these numbers, the 10 states with the lowest tax burdens are growing at an average rate of 2.6 percent — almost double Michigan’s growth rate and 34 percent faster than the national average. Which states look like better bets for investors?

The proponents of increased state spending on higher education also find little comfort in recent income growth figures. Between 2001 and 2005, the 10 states with the highest proportion of adult college graduates grew at an average rate of 1.93 percent — better than Michigan, but slightly below than national average. In the 10 states with the fastest growing personal income, eight had fewer grads than the national average, and only Hawaii and Maryland had more. These figures suggest that having lots of graduates is not a key determinant of economic vitality.

To be fair, statistical comparisons such as these don’t always tell the whole story. The phenomenon called "regression toward the mean" explains at least part of the differences — states at the low end of the economic growth range tend to catch up, and those at the high end can’t move much higher. The same applies to percentages of college graduates. But such "convergence" only explains part of the differences.

Also, no serious economist would argue that taxes are the only factor that explains different economic growth rates. But they are an important one.

Finally, those who say that the solution to Michigan’s economic malaise is to spend more on universities haven’t explained how this state gains by granting diplomas to the next generation of Tennessee, Iowa or Alabama workers. Yet that is exactly what we will be doing if there aren’t jobs available for graduates in Michigan. Unless Michigan makes significant improvements in its tax, regulatory and labor law climates, the jobs won’t be here and nothing will prevent our graduates from seeking opportunities in fast-growing, low-tax locales.

Jack McHugh is a legislative analyst and James M. Hohman is a research assistant for the Mackinac Center for Public Policy, a research and educational institute headquartered in Midland, Mich. Permission to reprint in whole or in part is hereby granted, provided that the author and the Center are properly cited.