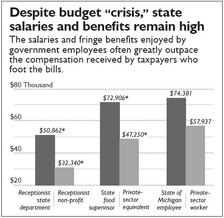 Source: Calculations based on data from the Michigan Department of Civil Service, the U.S. Bureau of Labor Statistics and private-sector sources. *Total compensation range centerpoint.

Gov. Jennifer Granholm has offered an unpalatable choice to Michigan taxpayers: Accept a high-cost government status quo or leave. Sadly, many are choosing the latter, as evidenced by the Comerica and Pfizer exits and the near-record number of emigrating families, according to recent U.S. Census Bureau and moving company data.

In presenting this choice, the administration has ignored another option, which is reforming government to do more with less. The Mackinac Center has recommended $1.9 billion worth of such savings, including $400 million in school employee health care reforms, almost $200 million from prison privatization, $150 million that could be realized by repealing the so-called "prevailing wage" law on school construction projects and millions more dollars that could be saved by changing Medicaid incentives.

Many suspect that the political establishment has elevated government and school employees into a privileged class to be protected at all costs from economic changes that affect everyone else.

Meanwhile, the public is already grumbling over existing tax burdens, which explains their lack of enthusiasm for proposed tax increases. Excluding the direct beneficiaries of state spending, there’s widespread consensus that fundamental reform is needed. How can we break the impasse and bring about real change?

Let the people decide. Just as it did with the 1994 Proposal A school finance and property tax reform, the state could schedule a special election that presents two competing options: A tax increase proposal that feeds the expensive-government status quo or a $3 billion (out of $26 billion in state taxes and fees) budget reform mandate. The proposal should not contain politically driven "close the prisons and schools" cuts, but real cost-saving reforms like those mentioned earlier.

Some in the administration say that some of those recommendations aren’t practical or won’t save money fast enough. We have two responses.

First, our list presents a direction, not a precise roadmap. The state and the public schools have more than 200,000 employees. They know where the waste and savings opportunities are — but aren’t likely to cough them up as long as they’re protected by the promise of ever greater tax revenue.

Therefore, let’s establish a process by which that insider knowledge can be turned to finding ways to save instead of spend. The budget-cut alternative on the ballot could include a process similar to the federal "Base Realignment and Closing Commission." Outside finance and efficiency experts would be teamed with legislators and department insiders to devise the mandated cost-saving reforms.

Second, a question to the budget reform naysayers: Whose side are you on — taxpayers' or public employees'? Many suspect that the political establishment has elevated government and school employees into a privileged class to be protected at all costs from economic changes that affect everyone else.

If they deny holding this perspective, there is a way they can prove it. Gov. Granholm’s own tax increase commission recommended reforming excessive school health care benefits to help remediate a budget situation that the administration calls a "crisis." Well, Michigan businesses facing real crises have asked employees to share the burden and thousands have made painful wage and benefit concessions.

So, do the same with school employees. Open the state employee health insurance system to school districts, and announce that henceforth state funding to districts will be reduced by the amount their current health expenses exceed what this alternative costs.

Sure they will howl, but is there a crisis or not? This move would save millions of tax dollars and still provide quality health insurance to school employees. School boards and local bargaining units would have a choice: Stick to current contracts and accept layoffs or concede to the state insurance plan. Choosing the latter would be eased by the knowledge that when current contracts expire, everyone will be forced into the state plan anyway.

Armed with a cost-cutting mandate from the people, other measures become possible. Concessions could be extracted from prison workers who reportedly earn 33 percent more than the national average. (Privatizing a few prisons might help bring about a willingness to negotiate.) Devolving state police road patrols to counties could save $65 million without the loss of single public safety officer. Cutting non-need-based college scholarships in half could save more than $60 million. These are just a few of many ways to do more with less.

Michigan voters should be given the chance to decide for themselves: Pay higher taxes for government employees to earn better benefits and higher salaries than comparable private sector workers, or don’t pay more and let them live like the rest of us.

Jack McHugh is a legislative analyst and Kenneth M. Braun is a policy analyst specializing in fiscal and budgetary issues for the Mackinac Center for Public Policy, a research and educational institute headquartered in Midland, Mich. Permission to reprint in whole or in part is hereby granted, provided that the author and the Center are properly cited.