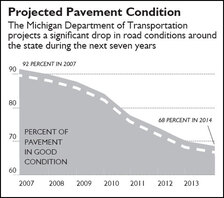 Michigan’s road network is at a turning point. It can be allowed to deteriorate or it can be revitalized with new reforms. As long as the state stays in the road business, it must make roads a higher priority.

In 2004, Michigan state and local governments spent about $3.4 billion on road construction and repair. However, money available for new construction and maintenance is decreasing at the very time the need for investment is increasing. Michigan’s transportation funding shortfall is hundreds of millions of dollars per year for state, county and city roads. A well-maintained transportation network contributes more to the quality of life than many other state spending programs, including those often touted as promoting "economic development."

The best option for finding new road money is for the Legislature and governor to get serious about spending a lot less on things in state government that are far less important.

The congestion picture is no brighter. The Michigan Department of Transportation estimates that 15 percent of urban freeway vehicle miles traveled are congested. Absent new funding, this number is expected to reach 43 percent by 2030. Congestion and auto damage from potholes costs the average Michigan motorist more than $318 per year, a figure likely to grow.

Fuel tax revenues have been flat, pegged to 19 cents per gallon regardless of the price of gasoline, and high prices have reduced consumption. Because of extensive bonding to augment tax revenue in recent years, debt service is climbing rapidly as construction costs soar. Asphalt costs nationally rose 43 percent between 2003 and 2006, and concrete costs rose 34 percent. As a result, Michigan’s inflation-adjusted road dollars per million miles of travel dropped 53 percent since 1960.

The needs are especially clear to drivers in congested areas of southeast Michigan and the communities around Grand Rapids. However, more taxes with "business as usual" spending are not good enough. We need a smarter strategy for raising and spending the funds.

Michigan’s transportation infrastructure requires at least an additional $460 million annually. Legislators have a smorgasbord of options for stitching together a package that would meet those needs. They could start by scrapping the gimmicky 21st Century Jobs fund and put the money toward a real economic development program — good roads.

They could also consider raising gasoline and diesel taxes to come up with more, though that solution should be offset with tax and spending cuts elsewhere in state government to avoid further damage to our already fragile economy. Michigan gasoline and diesel taxes together cost the average driver $107 in 2003, ranking us 42nd as a percentage of personal income. As of late 2005, our 19-cent-per-gallon gasoline tax ranked 31st nationally. Our diesel tax on motor carriers, at 15 cents per gallon, ranked us 45th among all states. So higher gas taxes, especially if they are sunsetted, are one option that wouldn’t put Michigan out of line with other states. Another option is to dedicate up to 2 points of the 6-percent sales tax on gasoline to roads.

Additional road money could also flow from introducing automated express toll lanes for southeast Michigan; implementing impact fees on those benefiting most from new roads; changing current practices that drain money from the Michigan Transportation Fund; and enacting common-sense efficiency reforms like repealing prevailing wage requirements, consolidating the multiplicity of road agencies, and privatizing more maintenance functions through competitive contracting. Whatever money is raised should be targeted to key high priority state, county and city roads that are critical to economic development and mobility.

The best option for finding new road money is for the Legislature and governor to get serious about spending a lot less on things in state government that are far less important.

In light of Michigan’s economic plight, meeting critical transportation needs must be a higher priority for state government. Uncommon leadership is required to accomplish this without raising the overall tax burden. Lansing can change its spending priorities, fix the roads and improve our business climate all at the same time.

Dr. John C. Taylor is a senior policy analyst with the Mackinac Center for Public Policy in Midland, Mich., an associate professor of marketing and logistics at Grand Valley State University and author of the Center’s forthcoming study on the Michigan transportation system. Permission to reprint in whole or in part is hereby granted, provided that the author and the Center are properly cited.