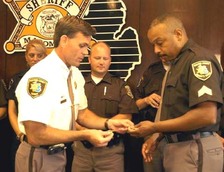 The city of Mt. Clemens contracted with the Macomb County Sheriffs department for police work.

The city of Pontiac is in dire straits. It had an official fiscal year 2005 operating shortfall of nearly $11 million and it technically mitigated an expected 2006 general fund deficit by borrowing more than $21 million last February. Moreover, financial auditors have questioned whether or not Pontiac can even remain a "going concern." The Mackinac Center for Public Policy believes it can, provided bold structural changes are made to the system.

The Mackinac Center has been following Pontiac’s deteriorating financial condition and has warned that an emergency financial manager — with proper powers — may be necessary to right Pontiac’s sinking financial ship. It is important to stress "proper powers" because without the ability to set aside union contracts the manager’s work could be easily stymied. For the sake of argument, assume that an emergency financial manager had this authority. Where should they start making structural reforms? The answer is with city police.

Reforms need to be made that take Pontiac beyond the point of simply keeping its fiscal head above water.

The first official act of an emergency financial manager in Pontiac should be to negotiate a new agreement for law enforcement services. The manager could demand cost-cutting reforms from the Pontiac Police Department or it could contract with Oakland County for sheriff-provided law enforcement. According to the city’s fiscal year 2007 budget, city police represent the second largest employment unit in the city with 149 personnel. A competitively bid contract would likely lower costs to the city and improve services too.

It is important to focus on public safety for two reasons. First, more than 52 percent of the city’s fiscal 2007 general fund expenditures are gobbled up by police and fire services. It makes sense to look at the areas that cost the most. Second, basic services matter. People need and want public safety and at a good price. If they don’t get it, they may vote with their feet. Between 1990 and 2000 Pontiac lost 6.7 percent of its population and that number has grown since.

Competitive contracting for police services is not a new concept. In fact, Oakland County provides 11 townships and the city of Rochester Hills with a police presence under contract. The county also provides emergency dispatch services to others.

In neighboring Macomb County, Mt. Clemens gave up its 118-year old city police force in favor of a contract with the sheriffs department and is expected to save $1.4 million a year. According to Marilyn Dluge, Mt. Clemens’ finance director, that works out to a staggering 38 percent drop in the cost of providing such services in this fiscal year. The city, which approved the contract in July 2005, would have been bankrupt by December of that year had the deal not been struck, says Dluge. Pontiac needs to look for similar savings.

According to Pontiac’s fiscal 2007 adopted budget, police expenditures amount to $17 million, $16.1 of which is paid out of the general fund. If Oakland County took over the city’s police department and saved the city just 20 percent, it would translate into more than $3.2 million in annual savings for the general fund, or nearly one-third of the city’s official $10.9 million operating shortfall in fiscal year 2005. The general fund account is the area of operations over which elected officials have the most control. When the 2006 financial audit of Pontiac is complete, it is likely to show an increase in the city’s general fund deficit.

The city’s expenditures for fire suppression and medical services should also be reviewed for savings, but such an analysis extends beyond the scope of this essay.

There is some good news to report out of Pontiac. The city has contracted with Plante & Moran, LLC to act as city controller. This is a prudent decision. Without a sound accounting system, the city does not know month-to-month how much it has with which to pay its bills. Also, the city is considering leasing out or even selling its public golf course and the Pontiac Silverdome. The outright sale of such assets will not only generate one-time revenue, but the facilities can be put on the property tax rolls where they will start generating additional income.

Reforms need to be made that take Pontiac beyond the point of simply keeping its fiscal head above water. The city can start its long road to recovery by changing the structural nature of annual spending. Competitively contracting for police services would be a bold start.