How the Late Great Detroit Statler Lives On 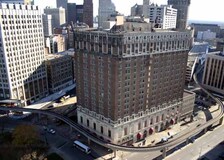 The Detroit Statler hotel shortly before its demolition in 2005.
Source: Michigan Department of Environmental Quality

The Detroit Statler has been demolished. Although the 18-story hotel no longer overlooks Grand Circus Park, it has bequeathed an enduring lesson — that an economic system based on unfettered markets can unleash entrepreneurial genius that makes consumers its prime beneficiaries.

In this case the genius was Ellsworth M. Statler, who led the American hotel industry into modernity a century ago through his transformational ideas. His Detroit project became noted for a spot on the floor. The story tells volumes about Statler and the entire free-enterprise system.

“Life is service. The one who progresses is the one who gives his fellow human beings a little more, a little better service.”

Statler (1863-1928) was a strong-willed youth who wheedled a job as a bellhop at the plush McLure House in Wheeling, W. Va., at 13 and began filling notebooks with ideas on improving hotel operations. He became a teen-aged chief clerk after stints as head bellhop and night manager. He also took on private projects, turning failed enterprises into successes.

In Buffalo, N.Y., Statler began a big restaurant in "a poor restaurant town," averted looming bankruptcy by convincing creditors of his integrity and promoted the place into a moneymaker. During the city’s 1901 Pan-American Exposition—a financial flop—he managed a temporary hotel that more than broke even.

His next move almost killed him. He built and operated a 2,257-room temporary hotel for the 1904 Louisiana Purchase Exposition in St. Louis. A coffee-urn explosion scalded him so severely that he went into delirium. He fought for recovery, and from his hospital bed and wheelchair, between skin grafts and in racking pain, he directed operations so efficiently that he closed the enterprise with enough capital for his first permanent hotel.

Overnight travel in that era still meant mostly rudimentary accommodations, even in swanky hotels. Indoor plumbing had brought faucet water into rooms to replace the old jar and basin, but bathtubs and bathroom facilities were generally down the hall.

"Statler the Startler" opened his new hotel in Buffalo in 1908 with a private bath for every guest room. Although a fourth-grade dropout and non-engineer, he invented the "Statler plumbing shaft." Guest rooms were vertically stacked, and each pair had bathrooms back to back served by a common basement-to-roof shaft containing plumbing and utility conduits. Repair access was through openings behind the bathrooms’ mirrors. Construction efficiencies made possible Statler’s nationally famous slogan, "A room and a bath for a dollar and a half’—well less than primitive competitors charged. More affordable customer comfort forced every competitor to play catch-up.

The guest ruled. Statler introduced lighted clothes closets, light switches at the doors, bed lamps, in-room telephones, guest laundry services and much more. As he notified the press in his St. Louis days, "The policy of this house is to please."

He diligently trained employees in the Statler Service Code: "The guest pays your salary as well as mine. ... It is the avowed business of the Hotel Statler to please the public better than any other hotel in the world." He also wrote, "Life is service. The one who progresses is the one who gives his fellow human beings a little more, a little better service."

Statler applied that belief also to his employees, encouraging savings by matching their deposits with his own donations, initiating a profit-sharing plan, offering free health service and pioneering paid vacations in the hotel industry. Competitors grudgingly honored him with a new verb—to "Statlerize."

Cities vied to be the next with a Statler. After the Cleveland Statler’s 1912 opening, the competition was between Detroit and Pittsburgh. Gregarious civic leader Homer Warren escorted Statler through Detroit in a Ford Model T, convincing him of coming auto-driven growth.

The new 800-room Detroit Statler’s grand opening was Feb. 6, 1915. As the glittery guests danced in the ballroom, Statler spotted a blob of wax on the floor. He darted out to scrape it off himself: "Somebody might have slipped on it." Why not stand on status and give orders to an underling? Because a task needed to be done for the sake of the guests, and "I was here," he said.

Statler’s hotel chain continued to expand and remained pre-eminent long after his death. Despite the now-flagging renown of his name, his principles remain a bulwark of consumer-driven free-enterprise prosperity — innovation and service.

Daniel Hager is an adjunct scholar with the Mackinac Center for Public Policy, a research and educational institute headquartered in Midland, Mich. Permission to reprint in whole or in part is hereby granted, provided that the author and the Center are properly cited.