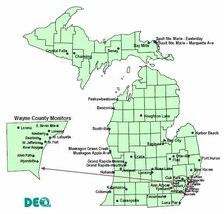 This table shows all the locations in Michigan where ambient air monitoring was conducted in 2005.
Source: Michigan Department of Environmental Quality.

The crisp autumn air that so delights our senses is cleaner today than it has been in decades, according to a report recently issued by the Michigan Department of Environmental Quality. This welcome news is yet another reminder that prognosticators of eco-catastrophe are off the mark.

The annual air quality report consolidates a year’s worth of monitoring across the state of six "criteria" pollutants designated by the federal Clean Air Act. The law established standards for the maximum permissible concentrations of the pollutants, and federal regulators track states’ compliance. The criteria pollutants are carbon monoxide, lead, nitrogen dioxide, sulfur dioxide, ozone and particulate matter.

This welcome news is yet another reminder that prognosticators of eco-catastrophe are off the mark.

The report shows that air pollution levels in Michigan continued to decline in 2005 due to emissions reductions from vehicles, fuels, power plants and manufacturers. Four of the criteria pollutants — carbon monoxide, lead, nitrogen dioxide and sulfur dioxide — registered "well below" the federal standard, according to the report.

Levels of ozone and particulate matter also declined last year, although Michigan is technically out of compliance for these pollutants. Although all counties in the state had previously met the ozone standard, stricter rules imposed in 2004 resulted in the reclassification of 25 Michigan counties (as well as some 500 others nationwide). The state Department of Environmental Quality has since requested that 16 counties be redesignated in compliance for ozone.

Seven counties in Southeast Michigan also have been designated by the EPA as out of compliance for particulate matter measuring 2.5 micrometers in diameter and less. But on Feb. 22, 2005, officials of the DEQ submitted documentation to the EPA demonstrating that the counties of Livingston, Oakland, Macomb, Monroe, St. Clair and Washtenaw are, in fact, in attainment. Only Wayne County remains out of compliance, according to the report.

Summaries of the good news are as follows:

Emissions of carbon monoxide have been reduced by 20 percent since 1990. As of mid-1999, the entire state has been in attainment for CO. Motor vehicles, including trucks and motorcycles, account for 69 percent of CO emissions in the state. Another 28 percent is emitted from aircraft, marine vessels, trains and off-road two- and four-stroke engines. Michigan’s industries contribute only 2 percent of the total.

The average air quality concentration of lead is now 94 percent lower than in 1983. There are no longer any major sources of lead in Michigan, and the average ambient levels are less than one-tenth of the federal standard. Much of this reduction is attributed to the removal of alkylated lead from gasoline.

The ambient concentrations of NO2 in Michigan are less than half of the federal standard. All areas in Michigan have been in attainment for NO2 since 1978.

All Michigan counties are currently in attainment for the original federal ozone standard. When data for Michigan’s ozone monitoring sites is averaged for the 2003-2005 period, there are a total of 24 sites out of 27 that either met or fell below the newer, more restrictive standard. This marks a significant improvement from the 2001-2003 period, when only four sites met the tougher standard.

Nationwide, the largest source of SO2 is coal-burning power plants. Most of the coal burned in Michigan contains low amounts of sulfur. Levels of sulfur dioxide in Michigan have consistently registered well below the federal standard.

Significant improvements in air quality have also been achieved beyond Michigan’s borders. Nationwide, over the past 20 years, ambient air concentrations of lead have plummeted 94 percent; carbon monoxide 57 percent; sulfur dioxide 50 percent and nitrogen oxides 25 percent. All this despite a near doubling of vehicle miles traveled, as well as substantial growth in the nation’s gross national product.

That hardly sounds like a nation on the verge of ecological collapse.

Diane S. Katz is director of science, environment and technology policy at the Mackinac Center for Public Policy, a research and educational institute headquartered in Midland, Mich. Permission to reprint in whole or in part is hereby granted, provided that the author and the Center are properly cited.