Get Rid of the Labels 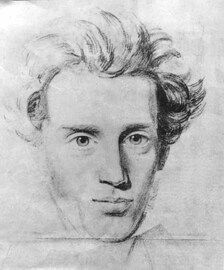 “If you label me, you negate me.”
— Soren Kierkegaard
Photo Source: Nationalchurch archives Stuttgart

Americans are hung up on labels. Everywhere you turn, somebody is calling somebody else a name — shorthand for what the other person’s political philosophy or ideological leanings are perceived to be.

If labels inform then they can be useful, but when they confuse or distort, they’re worse than useless. They are excuses for people to stop thinking and pigeonhole others in a fashion that may be quick and convenient but superficial and misleading.

Consider the tired dichotomy of "liberals" versus "conservatives." A hundred years ago, "liberal" described those who put "liberty" first and were wary of concentrating power. Over the course of the 20th century in America, it flip-flopped into a term to describe those who favor more government, at least in economic life.

Ideas worth supporting are those that are tested and found worthwhile because they produce results, not rhetoric.

"Conservative" is sometimes used to tag one who wants to preserve the status quo, and at other times to describe one who wants to shake up the establishment by introducing choice, markets and competition.

The confusion only worsens when the labelers go to work on foreigners. When Mikhail Gorbachev was introducing reforms in the former Soviet Union, he was referred to as a "liberal" and his hard-line Stalinist opponents were "conservative." American conservatives wondered why their label was always attached to figures that could be easily demonized.

And how about the word "moderate?" That’s been sanctified to describe one who occupies a lofty perch of enlightened and thoughtful objectivity. Look closer and you often find a person who hasn’t done his homework, can’t make up his mind or is afraid to take a principled position. When he finally does come to a conclusion, it’s strikingly inconsistent with other half-baked views he holds.

If we must label people, I suggest we do so in more meaningful ways. Instead of using one-size-fits-all monikers, we should describe traits and tendencies as they arise. For starters: Why not differentiate between those who are satisfied with rhetoric versus those who demand results?

People who advocate government-directed efforts for problems that were once regarded as personal, private or "civil society" responsibilities often settle for rhetoric alone. It doesn’t matter what government programs actually accomplish as long as they’re wrapped in what sounds like good intentions.

People who advocate nongovernmental solutions — changes in attitudes and behavior, strengthening of the family, and the involvement of churches and private associations, for example — are not typically animated by rhetoric. They are focused on results, and they have the incredible story of the American experience to which they can proudly point. It wasn’t self-righteous breast-beating that carved a great civilization out of wilderness; it wasn’t mere professions of concern that fed, clothed and housed more people at higher levels than any other society in history. It was strong families; rugged self-reliance; effective volunteer associations; compassion that was personalized, not collectivized; wealth-creating private initiative; and risk-taking entrepreneurship.

Here’s another way to categorize thinking: Those who are happy with short-term answers versus those who plan for the long-run.

Some people think only of the here-and-now, what strikes the eye, the present moment. Others see further ahead and recognize that quick fixes often yield long-term disaster.

Yet another possible method of drawing distinctions: Those who exhibit little interest in liberty versus those who understand that without liberty, little else either matters or is possible.

Ideas worth supporting are those that are tested and found worthwhile because they produce results, not rhetoric. Ideas worth supporting do not mortgage the future for the sake of the present, and they do not treat other people’s liberty as though it were so much scrap paper waiting to be cleared away.

If this approach compels some to dig deeper and learn more than what can fit on a bumper sticker, public debate will be better informed.

Lawrence W. Reed is president of the Mackinac Center for Public Policy, a research and educational institute headquartered in Midland, Mich. Portions of this commentary were adapted from his column in the January 2001 issue of The Freeman, a journal of the Foundation for Economic Freedom. Permission to reprint in whole or in part is hereby granted, provided that the author and the Center are properly cited.