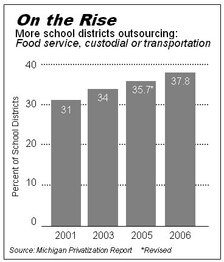 With more and more public education dollars going toward employee retirement and benefit plans, many Michigan school districts are turning to privatization as a way to secure more funds for their core mission. By privatizing non-instructional services — janitorial, food and busing — districts can more easily balance budgets without laying off teachers or eliminating programs. As of August, 37.8 percent of school districts surveyed by the Mackinac Center for Public Policy contract out at least one of these services.

With savings of this magnitude, it is not surprising that superintendents are investigating privatization.

Over the summer, the Mackinac Center contacted all 552 school districts listed in the Michigan Education Directory, which has published school district data since 1936. Only one district, Detroit, has yet to respond to the Center’s inquiries. The White Pine school district in the Upper Peninsula was excluded from the survey because its schools have closed. Each district that reported contracting out for one or more of the three services was contacted at least twice to ensure accurate reporting.

The total number of districts that contract out for at least one service — 208 of 550 surveyed — rose from 35.7 percent in 2005 to 37.8 percent. Only five districts brought a contracted service back in house since completion of last summer’s survey.

Food service outsourcing is something of a perennial favorite among school districts seeking to hire private vendors. Across the Great Lake State, 158 school districts (28.7 percent of districts surveyed) contract out for some type of food service. This total is unchanged from last year. Some districts contract for management of their existing program and district staff, while others remove themselves from the service altogether by allowing a private firm to provide everything from employees to menu design.

For the second year in a row, there was significant growth in custodial privatization, increasing from a revised 50 districts in 2005 to 63 this year, a percentage increase of 26 percent. The savings school districts can achieve with competitive contracting is substantial. Officials at Muskegon Reeths-Puffer expect to save about $480,000 a year with private custodians over the life of the contract. That works out to about $114 per student. In Auburn Hills, a new contract may save the Avondale School District up to $490,000 — $128 per student — in fiscal 2007. In Jackson, a new custodial contract is expected to annually save $1.3 million, or about $193 per student.

With savings of this magnitude, it is not surprising that superintendents are investigating privatization. It is hard to imagine any district turning down an extra $100 to $200 per-student in state funding were it offered. Why then are competitive contractors providing these services in only 37 percent of Michigan school districts? Center researchers have been given answers ranging from fears of increased costs to union opposition.

One school official, who asked to remain anonymous, said "The contracts certainly make us more efficient and provide a level of expertise that (the district) could not otherwise expect. We are currently satisfied with both of our contractors. In my opinion the largest barrier to privatization is the highly effective MEA (Michigan Education Association) campaign against contracting. I think that good arguments can be made for contracting and that efficiencies can be achieved, but it is a hard sell against the MEA public relations machine." The school district he works for contracts out for food and transportation services.

The number of school districts that secured competitive contracts for transportation services this year grew to 24, an addition of three new contracts to the survey. This was a significant turnaround; between 2003 and 2005 district contracting for busing had fallen by three.

The reality is school privatization is here to stay. By adopting privatization to some degree — and at greater percentage rates than ever before — school officials are showing a "revealed preference" for a particular management technique. In other words, privatization appears to save money and/or improve services more often than not. Otherwise, why would officials be willing to endure the special-interest opposition that inevitably accompanies it?

Officials who choose the privatization route are apparently doing so because it provides an expected real benefit.

Ben Stafford is a research assistant with the Mackinac Center for Public Policy, a research and educational institute headquartered in Midland, Mich. Michael D. LaFaive is director of the Morey Fiscal Policy Initiative for the Center. Permission to reprint in whole or in part is hereby granted, provided that the author and the Center are properly cited.