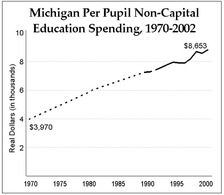 A proposal likely to appear on the November ballot would change Michigan law to mandate annual inflationary education expenditures. But the results of government education spending over the last several decades have shown little that would lead us to think simply spending more would improve schools. In large part, this is because schools generally operate without significant institutional incentives for producing improved results.

Consider this: In what service sector have inputs more than doubled over three decades, while outputs have remained stagnant? If you answered, "Public education," go to the head of the class.

Our educational institutions usually do not create incentives for instructional improvement by rewarding effective teachers and sanctioning ineffective ones.

In both Michigan and the nation at large, the amount spent per student in public education has more than doubled since 1970, even after inflation is factored out. Compare that doubling of expenditure to students’ performance on the federally administered National Assessment of Educational Progress. The most recent average reading and mathematics scores on that test are virtually identical to the scores in the early 1970s.

However, following the logic of the proponents of this spending mandate, Michigan citizens should disregard the relationship between more money and unchanged results. Is this reasonable? Simple observations of the market reveal that firms strive to create value by keeping costs low, while simultaneously increasing the quality and quantity of the goods or services demanded by consumers.

The contention that these fundamental principles don’t work in government schools has long been discussed by education policy scholars such as Eric Hanushek, who found a decade ago that education sector productivity, or the ratio of outputs to inputs, "is falling at 3.5 percent per year relative to low productivity sectors of the economy."

Such a finding appears contrary to common sense, since our experience tells us that having more money makes individuals’ lives better than having less money does.

Based on this perception, many people seem to believe that the worst performing schools are those spending the least per student. But this is not the case. Take, for example, the 117 Michigan public schools that have failed to meet federal and state standards under the No Child Left Behind Act for five or more consecutive years. Calculations based on recently released data from the Michigan Department of Education show that 89 percent of those consistently failing schools are in districts that rank in the top quarter of all districts in terms of per-pupil expenditures for operations.

A primary reason for this disparity between spending and achievement is the relatively weak incentives for schools to improve, a problem researched by Hanushek and others.

One vital area of education that lacks meaningful improvement incentives is instruction, an area of operations that accounts for more than half of all education spending. Instruction of students, a school’s primary mission, is an activity that takes place largely in classrooms with teachers. Teachers’ pay is usually based on a "uniform salary schedule" that gives raises according to increasing years of employment and the highest educational degree attained, as noted by a recent Harvard University study of collective bargaining.

Since the mid-1980s, median teaching experience has hovered at about 15 years. Moreover, from 1961 to 2001, the percentage of teachers with master’s degrees increased from about 23 percent to 56 percent. This means that public education employers are maintaining an "experienced," highly educated workforce, even though their spending on labor is hardly ever connected to outcomes.

In other words, our educational institutions usually do not create incentives for instructional improvement by rewarding effective teachers and sanctioning ineffective ones, even though the effectiveness of teaching in the classroom is the most important factor in student achievement.

The fact that measures of educational results have been stagnant or even slightly declining over the past several decades ought to alert Michigan citizens that simply hiking school spending – as we’ve already been doing for decades – will do nothing by itself to improve learning for Michigan’s children. In fact, increased spending distracts us from addressing the lack of incentives for public schools to fulfill their most vital mission: the quality instruction of students.

Ryan S. Olson is director of education policy at the Mackinac Center for Public Policy, a research and educational institute headquartered in Midland, Mich. Permission to reprint in whole or in part is hereby granted, provided that the author and the Center are properly cited.